Roger Bacon principal Steve Schad is excited to go into work every day, leading a regiment of teachers and staff that are molding the next generation of leaders.

It’s not far from what the 20-year education veteran did in his former career, teaching young men and women how to be Marines.

“This wasn’t something I planned on doing,” said Schad, who retired as a Marine Corps lieutenant colonel in 1999. “Honestly, when I retired I didn’t know what I was going to do. I was enjoying retirement.”

The Next Phase of Life
Amy Wilson and Michelle Brummett work closely with Schad in the school’s main office, as does Mary Beth Hausefeld in the school’s business office. They, as well as students and faculty, admire their principal. And “very few times” does he show his Marine side, said Wilson, who’s been with the school for 17 years.

Hausfeld knew Schad was the right person for the head post nine years ago during the interview process. She asked him a few questions and he answered. At the time he was to move to the next portion of his interview process, Hausfeld remembers Schad saying, “No, I want to hear what she has to say.”

“That spoke volumes to me,” said Hausfeld, who’s been with the school for 32 years. “He took the time to listen to what my questions were, and to me, that’s one of is best qualities. He treats
everybody the same, and he wants to hear what you have to say. He listens.”

Schad’s last four years in the Marines were in Spain, first at the Spanish Naval War College in Madrid and then as a naval attache at the U.S. Embassy. He studied Spanish for a year at the Defense Language Institute in Monterey, CA.

Schad’s teaching career actually was a serendipitous encounter. By chance, he was asked to be an assistant varsity and junior varsity head girls basketball coach at Hillsboro High School in
Highland County.

Being involved with the basketball team led him to think about teaching. He knew about Troops to Teachers, an Ohio program that helps veterans become teachers in civilian life, before he left the Marines, so he asked if there were any openings. There was an immediate opening for a special education teacher, and a Spanish teaching post would open the following school year.

After a few years in Hillsboro, Schad moved to teach Spanish at Batavia High School for a couple of years before becoming an assistant principal for three years. He then became the principal at North Adams High School in Adams County.

The Joy of Catholic School
Schad is in his ninth year as Roger Bacon’s principal, a post he relishes as a Catholic.

“It is nice being in a Catholic school where we say prayer before every class,” said the St. Xavier High School graduate. “We can talk to kids about values and about their faith in ways you can never do in a public school. Being a Catholic, it is refreshing to be able to integrate your faith on a daily basis with the way you talk with the kids here.”

The students at Roger Bacon also learn about the 16 Franciscan values, focusing on one every quarter. After four years, students will learn about each one.

“It creates an environment here where we can celebrate and enjoy our faith, and share that with people who may not share our faith, but have a greater appreciation for who we are [as
Catholics].”

By teaching these universal values, Schad said “we’re attempting to plant good seeds in good soil. Our kids are the good seeds, and I hope Roger Bacon is good soil.” 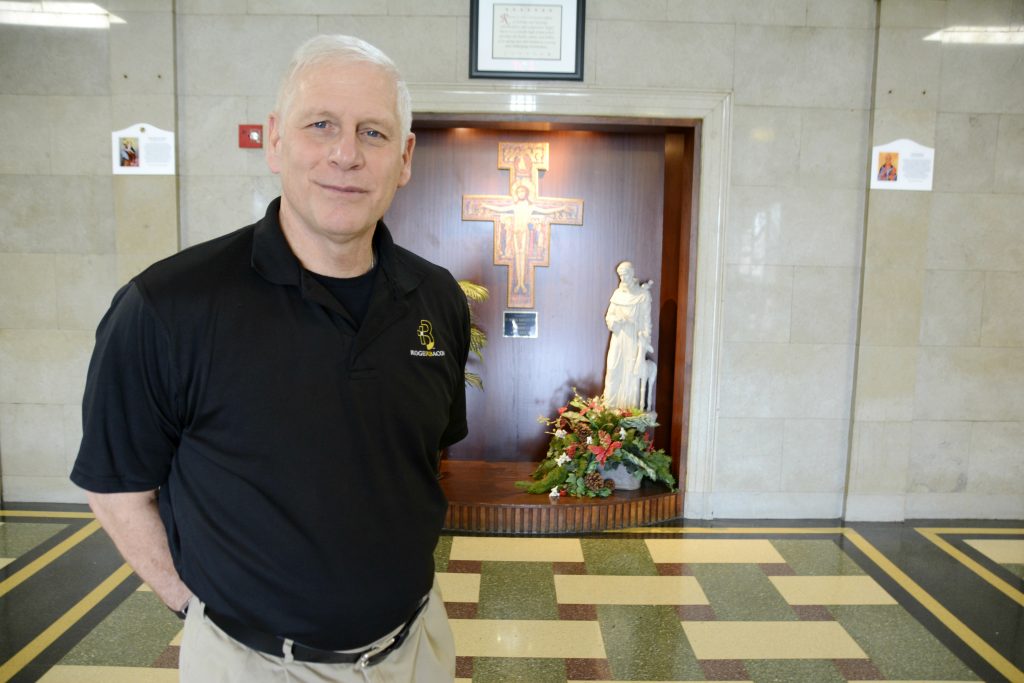