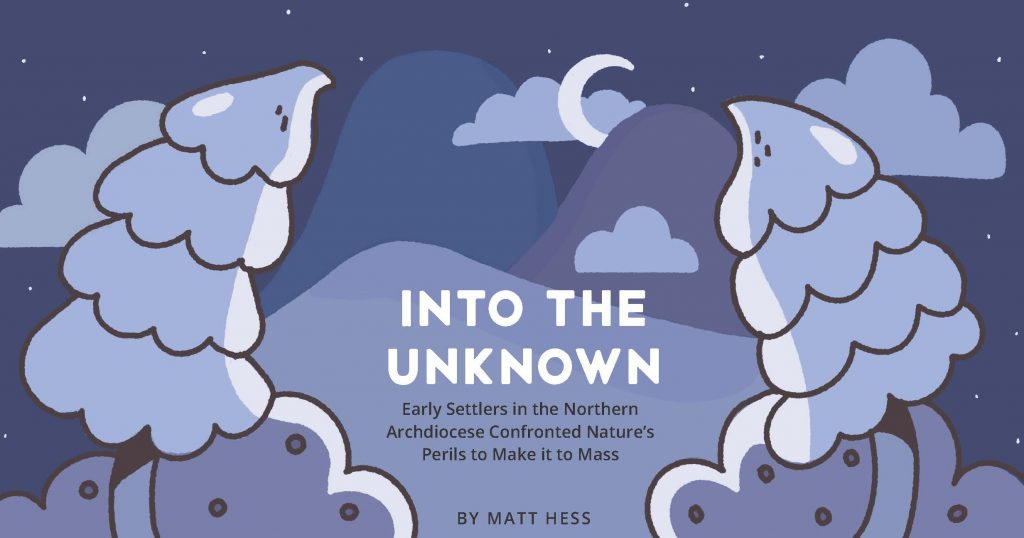 One of the unique areas of our archdiocese is the Land of the Cross-Tipped Churches. Those who visit this northern region often ask, “Why did they build so many churches so close together?” This is especially profound at points in Mercer County where several spires are visible at once. The short answer is the hardships of the times called for parishes to be nearer to the rural people served by priests who traveled great lengths in their ministry.

Driving through the lush green fields of corn and beans, it is hard to believe this land was once a formidable swampy forest, set on the Maumee and Miami watersheds. An early settler to Maria Stein in the mid-1830s, Liwwät Böke (in English, Boeke), said, “Of the forest, my first impression was: I am imprisoned, swallowed deep in its gloomy throat.” German Catholic immigrants, like she and her husband Natz, began clearing the forest, digging ditches and creating drainage systems that have been updated and are used today to procure rich farmland. Those that settled here, had a lot of faith that they would survive in this environment. Travel was tough and goods were expensive, but the people were not going to give up on trying to make it in the New World.

During the War of 1812, one soldier noted, “The road from [Fort] Loramie’s block house to St. Mary’s…was one continuous swamp, knee deep to the horses and up to the hubs of the wagons…many were left sticking in the mire and ravines.” After 1845, the Miami-Erie Canal helped relieve that burden. This water way, which is comparable to Interstate-75 today, moved people and goods at a breakneck speed: 4 miles an hour. Locally, though, the question still remained: “How will we get to Mass?”

As noted above, the trails and even the main roads were bad, and the problem persisted for decades. The pioneer roads often became impassible in winter snow and in the mud that came with spring rains. Even in the Fall, dense forests would drop upwards of eight inches of leaves, making travel cumbersome. Obviously, the roads were unlike our modern streets. Paving often consisted of logs laid across the marshy land. Charles Dickens described a stagecoach ride across Ohio in 1842 as “enough, it seemed, to have dislocated all the bones in the human body.”

A common saying, often attributed to Father Francis de Sales Brunner, C.PP.S., who was a missionary leader in the area, was, “Faithful should not have to walk more than four miles to attend Mass.” Whether he said it or not, many communities followed that axiom and petitioned for a closer parish.

One of these parishes is approximately two miles west of Minster in a place called Egypt. The charming country parish of St. Joseph was founded there in 1852, after the local farmers had so much trouble getting to Minster

considered using a windmill to drain the land, like in the old country, but the forests were deemed too thick for strong enough winds to power it.

According to local lore, the area gets its name, “Egypt,” after settlers in the 1830s found it to be a harsh, unforgiving environment; their toil and hardships reminded them of the accounts of Egypt in the Old Testament. Later, in 1856, the Sisters of the Precious Blood founded a convent there, Mary’s Flight to Egypt, which many mistakenly believe to be the origin of the name.

The spires of the cross-tipped churches continue to be a beacon above the fields and pastures, just as they were above the trees of the dense forests and marshlands. The sun glinting off the gold crosses on top radiates the presence of God to those who toil in the fields that their ancestors drained and made fertile. Although travel is easier today, the cross-tipped churches continue to remind the faithful that God’s presence is moving among them.

This article appeared in the June 2021 Bicentennial Edition of The Catholic Telegraph Magazine. for your complimentary subscription, click here.

Into the Unknown Coloring Page

Archdiocese of Cincinnati: Coat of Arms