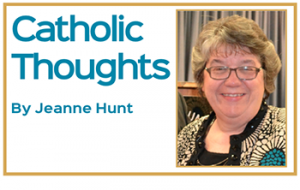 Have you decided on your New Year’s resolution yet? Every year, thousands of us decide to lose 10 pounds and join the gym, stop playing so much golf and spend more time with the kids, or if you really mean business, go to Mass more than one day a week.

I would like to suggest something good for your soul: learning the gentle art of saying “no.” Most of us think “no” is a lazy excuse for just not wanting to get involved. But it is a real test of discernment to know when saying no is sometimes the best answer. It seems that we are raised with the idea that real servanthood in the kingdom of God requires say “yes” to everything. We say “yes” to coaching soccer when we have never kicked a soccer ball in our lives, “yes” to being den mother for troop 674, “yes” to subbing as a lector when we will have to skip mass with our family to show up. We are convinced that we should sacrifice our needs for the greater good. Yet, is it really a greater good? Or are we undermining God’s good work?

There are times when we are standing in the way of grace by stubbornly sticking to our guns, and God wants us to put down our guns and take up a new direction. I remember the Pumpkin Lady as a real example of getting stuck in a “yes.” She told me that one autumn she painted a pumpkin with pretty flowers on it. It was so fine that three people asked her to make one for them. More and more people wanted her painted pumpkins. After five autumn seasons, she had orders for more than 200 pumpkins. She kept saying “yes” until she was about to drop from pumpkin fatigue.

When she finally came to me for advice, I told her it was time to say “no” to pumpkins. Her whole life was caught up in doing something she no longer enjoyed at the sacrifice of her family and personal life. That “no” restored her peace and allowed her to focus on all those neglected areas of her life. In this case, “no” was a grace that she had avoided for five years.

So, how do we discern between two goods? It is St Thomas Aquinas who remarks that one of the greatest spiritual challenges is the choice between two goods. Many times we It is the Gospel of the wise and foolish virgins that teaches this lesson. Could it be that the foolish virgins ran out of oil, not because they were irresponsible, but because they had taken on too much responsibility and ran out of time? Or perhaps they had to take their nephews to Temple Shalom Hebrew lessons, or volunteer at the Jerusalem soup kitchen.

We must realize the lamp of our spirit can run out of oil. We need quiet moments for prayer, time to spend with our spouse and children without any worry about schedules, time to do a good and mindful effort at work. And, it may very well be that our “no” allows someone else to say “yes” to a life-giving opportunity.

Before the first days of this new year are past, I invite you to make your list of things you need to say “no” to this year. Each of us has a list. It is just a matter of discerning where and how we can do the most good. This is a conversation we should have with the Holy Spirit. Then, muster up the courage to say “no.”

Hunt is a nationally recognized writer, speaker, and catechist.

Fear becomes sin when it leads to hostility toward migrants, pope says