Jim Jackson, advancement director of The Athenaeum of Ohio/Mount St. Mary’s Seminary of the West for more than seven years announced July 11 he is leaving the position to lead the advancement department at Summit Country Day School in Hyde Park.

Jackson, 58, former development director at Xavier University, held a key leadership role during the Athenaeum’s most recent capital campaign – Investing in Our Future … Preserving Our Legacy – which raised more than $19 million in 2010-11 in the midst of a deep nationwide economic recession – 21 percent above the $15.75 million goal.

“Jim has done an outstanding job as advancement director,” said the Rev. Benedict O’Cinnsealaigh, president/rector of the Athenaeum and Mount St. Mary’s Seminary.

“He has been a dedicated member of our staff … (and) is well respected in his field and very popular with our benefactors. We wish Jim and his wife, Mary, all the best as they begin this new assignment. May the Lord watch over them always and reward them for their service to the Kingdom.”

Jackson, who will depart the Athenaeum August 2, said that while he will greatly miss the Athenaeum, the opportunity at Summit Country Day School is one that complements his talents in leading advancement efforts in academia and fulfills his desire to move into a more traditional school setting.

“God has been present in my life and at times when I wasn’t even aware. Recently I was offered an opportunity to serve at an outstanding school with a rich 120-year heritage,” Jackson said. “One of the things that excited me most was that it places me in a well-rounded program of academics, athletics, visual and performing arts, community service and religious studies and has a reputation as one of the nation’s premier Catholic institutions.

“It is hard to express in words the many things I will miss about the Athenaeum,” he said.

“Certainly I am most grateful and humbled to have worked with so many tremendous people and leaders in our faith community. I also will miss the daily contact with seminarians and students who are a constant reminder to me of God’s goodness and of the mission in preparing future priests, deacons, and lay ministers for the Church. I certainly know I have been blessed in many ways by the grace of the dedicated priests, faculty, staff and administrative leadership and especially for the professional talents, support and fellowship of my colleagues. In my position, you rely heavily on volunteer leadership and benefactors and I am most grateful to each one for their personal friendship and sacrificial giving to the Athenaeum’s mission. Lastly I will always remember the pride I felt when walking across the 76-acre campus – truly a Cincinnati landmark and living reminder of faith in action.”

As a member of the leadership team at Summit, Mr. Jackson said he looks forward to “working closely with key administrators, board members, faculty, staff, students and all alumni and friends and to keep challenging myself to live by the ideals expressed in the mission statement for the benefit of the students.”

Jackson, of Mason, assumed leadership of the Athenaeum’s advancement department on April 25, 2005 replacing Kathy Kaelin-Symons who stepped down to assume the position of director of estate and trust services, a position she still holds.

Prior to his 13 years at Xavier University, Jackson spent 13 years with Dayton Ohio-based Van Dyne-Crotty, Inc., suppliers of uniforms, cleanliness, first aid and safety products to industry. He served as general manager of Cincinnati operations for the company.

Jackson, a native Cincinnatian, is a graduate of Moeller High School and Xavier University (Edgecliff College) and holds bachelor’s degrees in English and history
The Athenaeum is the graduate school of theology sponsored by the 19-county Archdiocese of Cincinnati. It serves the Midwest and beyond, with graduates in every state and abroad. The seminary division is the third oldest Catholic seminary in the United States. The institution is comprised of three divisions: Mount St. Mary’s Seminary of the West, the Lay Pastoral Ministry Program (LPMP) and Special Studies.

Summit Country Day School is an independent, Catholic, coeducational, college-preparatory school, founded in 1890 by the Sisters of Notre Dame de Namur with a 24-acre campus in Hyde Park; and a 16-acre Athletic Complex off of Interstate-71, near Oakley.

‘Everybody is coming together’: Miami archbishop lauds response to building collapse 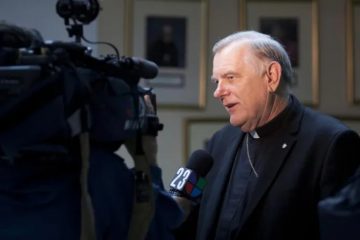