When it comes to ABCs and 123s, stay-at-home dad Zach Hinger hopes young children are able to add a little more faith to their early education. That’s why he’s written and illustrated a board book perfect for tiny hands, titled My First Catholic Words. Based on the concept of other “first words” books, Hinger said the project started out with just his own family in mind.

“I never intended for it to be anything bigger than that,” said Hinger. “I wanted something for these two- and three-year-old kids, to help them start to learn the faith. And I know there are a lot of great resources out there, but a lot of them are targeted to kids slightly older than that. And I felt like there was a hole, especially in that very first step.”

Hinger knows about those first steps into the Catholic faith. He graduated in 2010 from Franciscan University of Steubenville with a double major in theology and catechetics with a focus on youth ministry and a minor in business. Following college, Hinger landed a job as director of Children’s Formation for St. Patrick Church in Taylor Mill, KY, guiding the faith of children from pre-school to eighth grade, and eventually taking on junior high and high school students. During Hinger’s four years in Covington, he married his wife, Amanda, whom he met when both were involved in youth ministry at St. Maximilian Kolbe Church in Liberty Township. Family illness brought the couple closer to home in West Chester, and Hinger said “a nudge from God” got him back in youth ministry at his old church. Within a year, he was the pastoral associate for evangelization and catechesis and his first child, Lillian, now 5, was born. By the time Hinger’s second daughter, Theresa, now 2, arrived, there was a change in Amanda’s schedule. Instead of working from home as a consultant, she would have to return to full-time work outside the home at a position that also required travel. Hinger’s job required “a lot of evening and weekends,” and after much prayer and discernment, the decision was made for him to stay home with the children.

Hinger said he spent his first year at home enjoying time with his children, but by the second year, he started working parttime for his family’s construction company and creating a children’s book for his daughters.

“I just kind of started it as a pet project for our kids and over this last year, in prayer as I was finishing it, God was nudging me and telling me that he wanted me to do something more with it,” said Hinger.

Hinger said in January, he decided to self-publish the book, tapping into his business degree to create his own company, Joyful Little Catholics, LLC, and build a website for people to purchase the book. Then a funny thing happened on the way to the printer: His wife was due to give birth to the couple’s third daughter the same week 1,500 books were to be delivered to their home. The quarantine, however, stopped everything, except the arrival of baby Cecilia, and the books were delivered two months later in June.

Hinger said just by word of mouth and social media, 100 books sold within the first month. Now, packing and selling books has become a family affair, and Hinger said he and Amanda take turns praying for those who have made purchases.

“It has been incredible to see how this venture has brought our family together,” said Amanda. “The kids love helping us count out books and fill orders. All along, Zack’s whole mission has been to bring families closer to God and closer together. I love seeing the fruit of his work and hearing from people it has impacted.”

Hinger said a second book is already in development, one aimed at slightly older children, and proceeds from the first book will pay for that one. With a built-in test audience, it shouldn’t be hard to complete. Now that the family is back in church physically, Hinger said he has used the book to re-introduce his daughters to things in the church, like the sanctuary lamp, altar and baptismal font.

Included in the book is an image of the Sacred Heart of Jesus, which is also used for the company logo. Hinger said he and his wife were drawn to the image when they were praying about branding for the business. Little did he know the significance of that image with this new direction from God.

“God’s timing is always different from our own,” said Hinger. “I was thinking this thing was going to happen two months earlier, and God put us on hold for a while, and then it all fell in place and we were ready to run on the Feast of the Sacred Heart, which was really cool.”

This article originally appeared in the September edition of The Catholic Telegraph Magazine. For your complimentary subscription, click here. 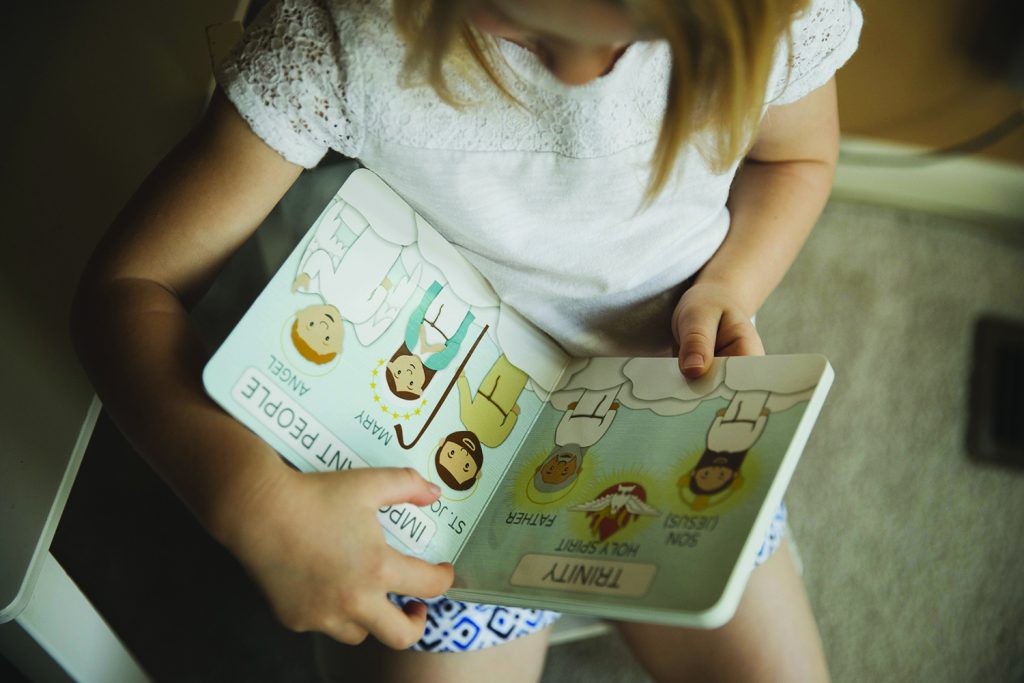