When I was 19, I traveled to the poorest country on this side of the world. As a middle-class, Midwestern white-kid traveling to Haiti on a mission trip, I had strong faith and missionary zeal, but nothing could have prepared me for the kind of abject poverty I had only ever seen depicted on TV.

I traveled with five friends to a Catholic boarding school that served 300 of Haiti’s poorest and brightest students. Upon arrival, I noted the blue-helmeted UN soldiers who stood guard around the airport, rifles in hand, as we made our way to the trucks that drove us to the school. The driver swerved around other cars, demonstrating a driving skill that one can only learn in an area where there are no rules of the road, traffic lights, road markings or other tools of order.

We pulled up to the solid-metal front gate of Louverture Cleary School in Port-au-Prince, and waited for security guards to allow us beyond the 12-foot-high cinder block walls with broken glass embedded in the tops to prevent anyone from climbing over them. But as the gate closed behind us, the world blossomed. Exotic trees and vibrant flowers cast comforting shadows in the clean, bright compound. We arrived during opening prayer – 300 students assembled in rows. Boys wore crisp yellow shirts with khaki pants, and girls donned plaid skirts. “Their uniform is their most prized possession,” the school’s president later told me. “It means they get to go to school.”

We were there to install solar panels on the roof of the school, ensuring a renewable source of electricity, since the country’s infrastructure didn’t provide reliable power. We would also work with St. Mother Teresa’s local Missionaries of Charity in their orphanage.

But I didn’t get to spend any time on the solar panels and just one morning at the orphanage. The experience was heartbreaking. We spent half the morning in the infant nursery, holding and feeding the babies.  The  image  of one child with a head deformity from surviving a botched abortion will never leave me. The second half of the morning we spent in the toddler room, where we weren’t allowed to hold or touch the children. The Sisters explained to us that they would likely never be adopted, and it was best for them to unlearn their need for physical affection at a young age. None of the children had names.

I spent the bulk of my time in a large area of sand and dirt and small rocks adjacent to the soccer field. The school president explained to me that Haiti had very little infrastructure. Because there were no sanitary services, the school had to reuse, burn or bury their trash – and the hole for their garbage was full. And so I spent my days in the blazing heat, work gloves on, digging a garbage hole.

At first I was angry, and I funneled my frustration into the manual labor. I had prepared for almost nine months, raised thousands of dollars for the trip, learned about the country and its culture. My friends were installing solar panels and I was digging a garbage hole, usually by myself.

But after some time and prayer, God spoke to me. The mission trip, in my mind, was all about me: The incredible work I would do and the hope I would bring to the Haitian students. I had traveled to the poorest country on our side of the planet, and, somehow made that trip all about me.

But the students at Louverture Cleary didn’t need me. They needed a hole in the ground to place their garbage. God had me literally dig myself into my own hole to understand my own selfishness.

The week after I returned home, I was riding in the passenger seat of my mom’s car. It was garbage day, and I was looking at the overflowing bins at the end of the suburban driveways. And then a thought occurred to me. I said to my mom, “I am so grateful that someone takes away our garbage.”

DOMINICK ALBANO is the director of digital engagement for The Catholic Telegraph, as well as an author and national speaker. He and his wife have been married for 13 years and have four sons.

40 Days for Life: A Light in the Darkness 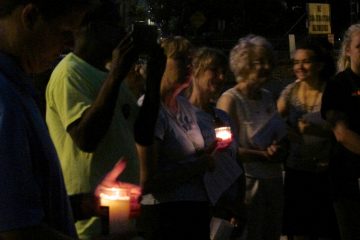