VATICAN CITY (CNS) — The purpose of the Lenten journey is to spiritually retrace the journey of Exodus — from the desert to the mountain of God, a Jesuit theologian told top Vatican officials.

Normally, the pope attends the traditional Lenten retreat; however, because he had a cold, Pope Francis followed the meditations from his room at his Vatican residence, the Domus Sanctae Marthae.

Father Bovati chose the theme, "’The bush was on fire’ (Ex 3:2) — The encounter between God and man in light of the book of Exodus, the Gospel of Matthew and the prayer of the Psalms."

The aim of the meditations was to help Curia officials reflect on their own experience of God by looking at Moses’ encounter with God, hearing his voice from the burning bush, the priest told Vatican News Feb. 29.

The task of the spiritual guide, he said, "is to foster this encounter of each person with God in order that they may listen, in a personal way, to the word of the Lord," who alone can give each person directions that guide and console.

On the first and second days, the priest reminded Curia members how Moses always set aside time to speak with God and how he was obedient to him. Moses knew there was only one path to take in life and it was the path God indicated, he added.

The fire described in the Bible blazes yet does not consume the bush because it is a force of life that ignites and renews the soul, he said.

This is why people should sincerely open their hearts to the gift Jesus brought to the world, he said. God speaks to each person individually, calling them to make "a turning point" in their lives, to discover "a higher dimension" in a vocation of self-giving and service to others.

On the third day, the theologian reflected on ways people resist God’s gift of grace. In fact, arrogance is often one reason people refuse to be obedient to God and his prophets.

People would rather pursue a perceived "right of self-determination, personal choice and free will," he said.

People of faith are at risk of idolatry today just as the ancient Israelites were when they made the golden calf, he said.

The key, he said, is not to look for certainty through "seeing" but to choose to listen to the voice of an invisible God. An example of relying too much on appearance is the focus on beautiful ceremonies and rituals that lack an authentic listening to and embracing of God’s word, he said.

On the fourth day of the retreat, Father Bovati focused on how God encourages, not criticizes, his people when they are having difficulties. This ministry of encouragement helps people dispel their fears, trust in God even more and follow him.

Life entails struggles and difficulties, he said, but the person of faith must respond by listening to God and to those in need.

On the fifth day, the priest said any battles the church faces must be met with true prayer and Christian witness.

"Prayer is a defense against the persecution experienced by the church today," he said. Faith is needed to fight evil, and God will hear everyone’s prayer as long as it is “sincere and humble.”

On the final day of the retreat, Father Bovati said a true disciple is not closed up inside his or her own world but goes out and brings God and his light to everyone.

"Being a shining example is a duty," he said.

The Jesuit also reminded his listeners that Moses never asked God for anything: "no reward, no signs, no promises." All he ever asked was to be God’s instrument.

Glenmarian to students: ‘I had to find a way to serve God’ 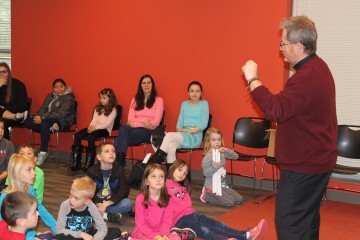