By Walt Schaefer
For The Catholic Telegraph

Jack Metz is a well-churched Catholic. An odyssey of his ended in November at St. Anthony of Padua Church in Walnut Hills when he attended Mass there. With that Mass, Metz has attended Masses at all 82 Catholic churches in Hamilton County.

“I started in the 1990s,” said Metz, 85, who worked as a Cincinnati journalist and public relations specialist starting as a copy boy for The Cincinnati Post in 1948. “I got one of the Cincinnati Catholic directories and, all if a sudden, started to look at the list of names of the churches in Hamilton County and realized I had already attended a lot of them – just about everything west of Vine Street,” said Metz, who grew up in western Cincinnati and then belonged to St. Martin of Tours Parish in Cheviot.

“I was in many of the (west side) churches for funerals, weddings, 50th anniversaries – those kinds of events. It then dawned on me – (to) finish off the whole list never realizing how many churches there really are. There are more than 80 in Hamilton County and I figured that was enough,” said Metz, presently a member of St. Monica/St. George Parish in Clifton, where he attended Mass while his wife was in Deaconess Hospital prior to her death in 2008.

Metz is a man who enjoys completing “my bucket lists”. Besides the churches, the avid golfer who still plays three days a week at Miami View Golf Club near Miamitown, has golfed at each of the 94 member courses of the Cincinnati Golf Association. He and two granddaughters have completed 50 to 60 of the Cincinnati Enquirer’s 100 things you should do in Cincinnati before you die. That project has been placed on hiatus as one granddaughter lives in Columbus while studying architecture at Ohio State University.

Architecture was Metz’s career of choice, too, but gave way to journalism when he discovered he was color blind during his first year at the University of Cincinnati’s College of Design, Architecture and Art (DAA). But, besides visiting the parishes as an expression of his faith, love of church architecture was a secondary motivation.

“I have always enjoyed the designs of the buildings and things like that,” Metz said. “St. Monica/St. George was used as the cathedral at one time and it has impressed me architecturally. It’s a beautiful old church; and, I’m very prejudiced toward St. Martin of Tours, where I went to school; where I grew up. I also like Our Lord Christ the King in Mount Lookout. I was just at Annunciation, in Clifton, another one and … St. Lawrence in Price Hill is old-style — everything is big at St. Lawrence and St. Williams, Price Hill  is another.”

The parishes also left Metz with another important impression.

“How friendly so many of these parishes are,” Metz said. “I would show up, and somebody would come walking over and say, ‘You’re new. I don’t remember you. I’ve never seen you here before. They would sit down and talk to me. St. Francis Seraph at Liberty and Vine was probably one of the most friendly places I’ve run into. There were a half-dozen people who came over sat down and talked to me, invited me to be sure to stay around after church because they had a social hour, coffee and donuts. In many cases, the priest himself came out before Mass. I have a habit of getting to church early. I’m usually there a half hour to 45 minutes before it starts. Being the only one sitting there on many occasions the priest will walk over. A (few weeks ago) I was at Mother of Christ on Este Avenue in Winton Terrace where I heard some beautiful, beautiful choir music there in Winton Terrace. It’s mostly an African-American congregation. It was very enjoyable. I had a great time. And again, I had two or three people come walking over to me.

“It has been an interesting ride. I did go back to the ones I had already been to before.”

Metz’ life has been an interesting ride as well. After his military service ended in 1951, Metz returned to The Post to work in sports, then local news where he became the Hamilton County suburban editor. He left in 1969 to work in the news department at Cincinnati Bell as a company spokesperson for 17 years. He then returned to the newspaper business as editor of the Western Hills Press and three other suburban sister papers. He retired in 1988.

This story originally appeared in the January 2015 print edition of The Catholic Telegraph.

Culture of vocations begins with each of us 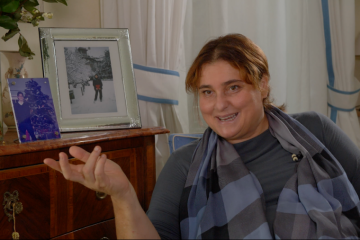