DAYTON DEANERY — Last fall, militant Hindu nationalists committed a rash of violent attacks on Christians within a remote and impoverished area of India, leaving an estimated 60 people dead and 50,000 displaced. More than 150 Christian churches were destroyed.

Now, Father Satish Joseph, associate pastor of Our Lady of the Immaculate Conception and St. Helen parishes in Dayton, is seeking to understand the root of this violence, as well as other clashes between Hindus and Christians in the world’s most populous democracy.

Father Joseph recently completed his doctoral dissertation, “Globalization and Militant Hindu Nationalism: The New Context for Theology in India.” He will graduate from the University of Dayton in May with a Ph.D. in theology.

Identity is a key element of Father Joseph’s work. While many news reports depict the perpetrators of violence in India as Hindu extremists or fundamentalists, Father Joseph believes the causes of recent aggression are much more complex. He argues that a complicated web of economic, historical, political and sociological factors contribute to misunderstandings between Christians and Hindus in India; the resulting violence cannot be drawn solely along religious lines.

Father Joseph’s research examines the collective search for identity that occurred in India in response to colonialism, beginning with the arrival of the Portuguese in the 16th century and continuing with direct rule by Britain until 1947. Many people came to associate a wide array of Western ideas and customs with imperialistic rule, and “the kind of Hindu that is a militant nationalist developed under British colonialism,” Father Joseph said.

Today, globalization re-creates the threat to cultural identity that emerged during the colonial period. “Just like colonialism came from the West, globalization moved from the West and is changing the world,” he said. “So once again, people whose identities are threatened co-opt religion as a way of fighting for their identity.”

In his dissertation, Father Joseph calls for the church in India to address these complex issues, first by contending with the negative effects of globalization. The church should also find a new framework within which to conduct interreligious dialogue. Finally, he said, the church in India “must truly become an Indian church — not a Western church that exists in India.”

“If you go to India today, churches look like anywhere in Europe. People dress like they would dress in Europe. The church architecture is European,” Fr. Joseph explained. “And that is helping Hindus to look at the church in India and say, ‘You’re foreign. You’re not Indians.’”

While India’s Christian population is less than three percent, a population of 1.15 billion people means approximately 26 million Christians live in the country — more than two times the entire population of Ohio. The Catholic Church has a strong presence in the country, with thousands of established primary and secondary schools, as well as community centers and orphanages. In addition, there are hundreds of Christian colleges and universities, hospitals, homes for the elderly and marriage counseling centers.

“The Church has done tremendous good in India. There is no doubt about that. But when Hindus look at it, they are not looking at that.” He said many Hindus believe that Christian educational and social institutions are founded merely as a means to conversion.

“It creates a crisis of identity,” Father Joseph said. “I think it’s important to understand the attacks on Christians from their real context.”

Father Joseph first arrived in Dayton nine years ago, expecting to complete a master’s degree in communication at UD and then return home to India. But then he also began working at Immaculate Conception as associate pastor.

Now, he also serves as associate pastor at St. Helen and recently learned that he will be incardinated into the Archdiocese of Cincinnati.

Utilizing his talents in communication and mass media, Father Joseph has also created a web site, Ite Missa Est, which includes transcripts, podcasts, and video of events, homilies, and lectures on Catholic theology. At Immaculate Conception, he started a “rock Mass” on Sunday evenings, which features contemporary music; he has also founded a group called The Seekers, which provides prayer and networking for the unemployed.

“My primary focus is pastoral ministry,” Father Joseph said. “That’s where my heart is.”

Father Joseph’s interest in Catholic social teaching has also led him to cosponsor an event commemorating the 25th anniversary of India’s Bhopal gas tragedy, frequently cited as the world’s worst industrial disaster. The event will take place April 28 at the University of Dayton.

Clipping coupons for the greater good

December 8: Our Lady of the Immaculate Conception

Dayton artist compelled to ‘work for the Lord’ 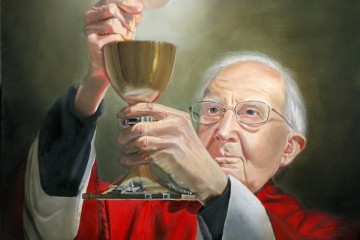