In 1909, a group of parishioners was making the long trek home from Mass at St. Aloysius Gonzaga in Bridgetown to Cheviot. A rainstorm broke out, drenching them and turning the road into mud.

That was the last straw. The churchgoers decided they needed their own parish and with that, the story of St. Martin of Tours Parish in Cheviot began.

That story, and numerous others, is recounted in a magazine-style publication produced by the parish in honor of its centennial. The centennial year was actually 2011, and the book was made available for purchase after Masses on Feb. 24.

Printed by Cheviot’s Deerfield Press on high-quality paper and professionally laid out in Adobe InDesign, the project grew out of plans to develop a video for the parish centennial. Patricia McGeever and others took the lead on that project, and in the process of collecting information, it was decided that the history of the parish should be written down.

Parishioner Lis Kissel, a registered dietician by trade and volunteer historian, was the editor for the project, working with others to dig up as much of St. Martin of Tours’ parish history as possible from 1911 to the present. The result, however, was more than a collection of dates and names.

“Many parishes do these projects,” Kissel said. “A lot of them kind of tell the history of the parish and give the sons and daughters who have gone on to become priests and nuns. I wanted to tell it more as a story that it wasn’t just focused on what happened in the borders of the church and school. A lot of understanding the history involved knowing the context of what else was going on in the world at the time.”

That desire led to a project that reads as a narrative of a parish from its rain-soaked beginnings to its vibrant present. Aside from the story telling, the 64-page, magazine-sized book does convey plenty of information. The first section tells the parish history, while the second focuses on St. Martin School. A third section takes a detailed look at the architecture and meaning behind various symbols and windows in the current church building. Sidebars throughout tell the story of who St. Martin of Tours was to the first parish mission and more.

“The decision was made to put the history down on paper so we could share it with the parishioners,” Kissel said. “Then it became ‘the book.’ We didn’t know how long it would be. It kind of took on a life of its own.”

The book’s layout and design was done by parishioner Mary Jo Betz.

“This was a huge project indeed,” said Betz, whose day job is senior designer at Cincinnati-based LPK design agency. “Initially I was just going to help with the ads in the back and Liz would insert into her word document, but I felt like she was putting so much effort into the content that it deserved a more considered final product. I usually don’t work in InDesign, or with that extreme amount of text, so I’m sure I could have set it up better and it would have been much easier. We intend to have a hard bound version at some point for the church archives.”

Various other parishioners helped Kissel in its production as well. Information came from parish, archdiocesan and The Catholic Telegraph archives, among other places. Perhaps the most important information however was a pair of early accounts telling the story of the parish’s founding.

“There were a couple of descriptions of the early years,” Kissel said. “Both of them were written years after the events. There was a founding group of leaders called the Baker’s Dozen. One of the accounts was written by one of those gentleman many years later. It was handwritten… There was another lengthy typed account. There were some discrepancies but you could tell there was a core of information that was pretty solid.”

Kissel noted that many similar projects are done by parishes as photocopied pages with home or spiral binding. While there’s nothing wrong with that approach, Father Hamilton thought that for a once-in-100-years project, they could go for a higher quality project. The book is printed in full color and is staple bound. It was being sold for $5 after mass on Feb. 24. The book was funded in part by ad sales as well. The parish printed 1,000 copies.

“Father Terry was like, ‘We only do this once every hundred years. Can’t we do it nice?’” Kissel said. “It was Father Terry, too, who wanted it to present well.”

While the centennial-celebrating book didn’t make it to the public until the parish turned 102, Kissel expressed a desire that those who read the book will understand the commitment and dedication of the parishioners, priests and religious that served the parish for its first century of existence.

Praying the steps: A personal pilgrimage with a communal approach (Schedule of Events) 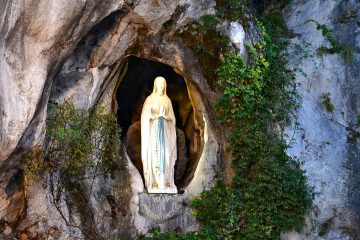