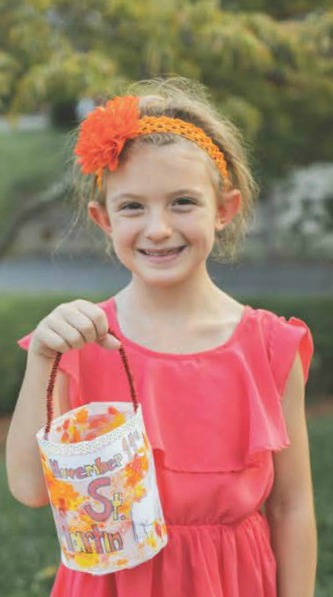 A crackling bonﬁre ﬂickering in the crisp fall air. Warm apple cider in hand. Friends and family gathered in a circle sharing laughter and making memories together. All a picture-perfect image of what an autumn night should be. Heading into November, we try to squeeze in just a few more of these magical moments before the chill of winter creeps in. How perfect it is then, that our saint this month is celebrated in just that way.

St. Martin of Tours was a Roman soldier-turned Christian just after Christianity was recognized as a religion in Rome. The story goes that while riding on his horse one day, St. Martin passed by a poor beggar who had no clothes. St. Martin stopped, drew his sword and sliced oﬀ half of his soldier’s cloak and gave it to the man. That night, in his dream, Jesus appeared to him wearing the cloak and from that point forward, St. Martin gave up his sword and willingly went into battle unarmed, vowing never to kill another man. Shortly thereafter, he left the legion altogether and later, despite trying to ﬂee and hide amongst a gaggle of geese to avoid it, became a well-loved bishop.

Our second son’s middle name comes from his grandfather, Martin. When we named him, we hadn’t considered just how great of a patron we had given him! Not only is St. Martin of Tours an amazing saint with a powerful story, he also has some super-fun traditions linked to his feast day.

A few years ago, we discovered that the Dayton Liederkranz-Turner German American Club hosts a St. Martin’s Day celebration. It’s a night of family fun in Downtown Dayton commemorating St. Martin of Tours in a traditional German way complete with bonﬁres, lantern making, treats and hot chocolate. The highlight of the night was a procession of homemade lanterns through the town while singing St. Martin’s Carols, led by a man on horseback dressed as the 4th Century saint.

As we have learned to do throughout this year, we’ll celebrate St. Martin’s Day at home, and, hopefully, you can celebrate with us! Let’s make our St. Martin’s day lanterns and create our own family processions (horse and traditional Roman soldier outﬁt are optional). As we parade throughout our homes, or in our yards, or even up and down our streets, may we remember the boldness with which St. Martin lived his life and the example he gave to us in recognizing God’s presence in the face of every person we meet.

Directions:
1. On the piece of cardboard, measure and cut out a 4.5” diameter circle for the base of your lantern and set aside.
2. Cut a piece of wax paper long enough go around the circumference of your cardboard circle (about 17”).
3. Color and cut out the St. Martin’s Day symbols.
4. Fold the wax paper in half lengthwise.
5. Place the colored St. Martin of Tours symbols on the inside of the folded wax paper leaving some space between each symbol.
6. Use crayon sharpener to create crayon shavings and sprinkle the shavings around the symbols inside the wax paper.
7. Place the wax paper on the ironing board and cover with a hand towel.
8. With the iron set to a medium setting, and with the towel in place over the wax paper, iron over the entire wax paper until the crayon shavings have melted and the two sides of the paper stick together. This may take a few minutes.
9. Form the wax paper into a tube around the 4.5” diameter circle, taping the bottom of the wax paper to the cardboard base as you go.
10. Once the base is securely attached, tape along the vertical seam where the ends of the wax paper meet.
11. Punch two holes on opposite sides of the top of the lantern.
12. Place a pipe cleaner through the hole and secure in place.
13. Place a battery operated tea light in the base of the lantern and go on parade!