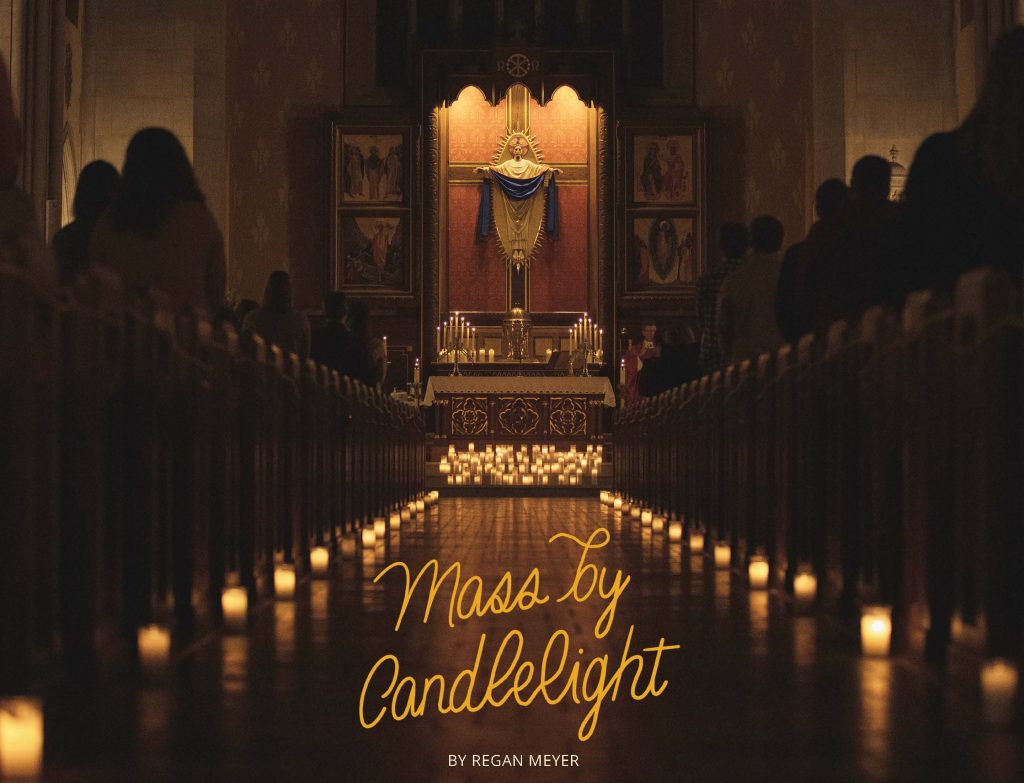 The whole of St. Cecilia Church in Oakley is dark, save for hundreds of candles that light the altar. It’s the second Thursday in December, and Queen City Catholic’s Candlelight Mass is being celebrated by Archbishop Dennis M. Schnurr.

Before and during Mass both sides of the church house confession lines 20 people deep. More than 100 young adults kneel in humble prayer, while a traditional choir sings Advent hymns. The atmosphere is reverent, holy and beautiful.

When St. Cecilia Church launched the Candlelight Mass just two-and-a-half years ago, the idea was to provide a reliable night of worship for young adults in the area.

“When we were talking about it, we wanted something consistent. Same day, same time, the same location every month. Millenials don’t often have any kind of consistency. Young adults need consistency, something to continually come back to,” said Sarah Rogers, archdiocesan associate coordinator for young adult ministry.

That consistency has paid off. When the Mass first began in 2018, it drew around 50 attendees. Now, the Mass consistently sees around 175 people in attendance.

“Probably the main thing that I have seen from Candlelight Mass is a deeper sense of community with people,” Rogers said. “It holds people accountable. You know that your Catholic friends are at the Catholic event. You like your friends, so you’re going to go, and a few times after you go you get into it. It stops being ‘I just want to be with my friends.’ It creates a more intentional, communal aspect.”

Rogers said the Mass embodies Queen City Catholic’s mission to proclaim the true, the good and the beautiful.

The Candlelight Mass is hosted at St. Cecilia’s because of the church’s beauty and strong young adult presence.

“The church is just so beautiful. It does a really good job with bringing the traditional and slightly more modern together,” Rogers said. “We wanted a place where everyone would feel comfortable gathering, whether they were [actively] practicing [their Catholic faith], or they fell away from it in college.”

The Mass also serves as a social outlet for young Catholics. Prior to the pandemic, attendees would gather at a local bar and socialize after Mass.

People would stay and visit until 12 a.m. Locals enjoying an evening out would witness young Catholics publicly discussing their faith. It became a means of evangelization.

The Candlelight Mass has brought some people to the faith. Rogers recalled a story of a young janitor at Mount St. Joseph University who was invited to Candlelight Mass.

“He said, ‘I walked in that building and I saw that beauty and I felt like I had been lied to my entire life about what Truth is,’” Rogers said.

Candlelight Mass at St. Cecilia’s, takes place every second Thursday of the month. Confessions begin at 6:30 p.m. and continue through Mass. Mass begins at 7 p.m.

This article appeared in the February 2021 edition of The Catholic Telegraph Magazine. For your complimentary subscription,, click here.

Pope Francis: ‘Experience Lent with love’ by caring for those affected by pandemic

Little Sisters of the Poor: 154 Years in the Archdiocese

Seek the Lord for January 2023