Four to be ordained for area parishes on May 19

How do you learn God’s plan for your life? “Go to Mass and pray in front of the tabernacle as frequently as you can,” said Deacon Craig Best, who will be ordained a priest in Cincinnati’s cathedral this month. “Give God your permission to lead you and ask to be open to His will, whatever it may be.”

Best is one of four area men who will be ordained priests for the Archdiocese of Cincinnati on May 19. Deacons Best, Jarred Kohn, Jacob Willig and Andrew Smith, are among the nine men who graduated from Mount St. Mary’s Seminary of the West, the archdiocese’s seminary, this spring. Each determined that God’s plan for his life was priesthood.

Deacon Best attended St. Mary School in Hyde Park and Purcell Marian High School before earning a bachelor’s degree in communications at Xavier University. Son of Elaine Best, a retired nurse, he worked in information technology before spiritual reading “marked a turning point for me, and as I started understanding more about the Mass, appreciating the real presence in the Eucharist, and coming to a greater understanding of God’s love for me,” he said.

Going to Mass during the week,  dedication to the Sacred Heart and Blessed Mother, and a developing richer prayer life helped open him to the possibility of a vocation to the priesthood, he said.

While Deacon Best discerned his vocation in adulthood, the seed for Deacon Jacob Willig’s call to the priesthood was planted when he was a child. “I would be mistaken if I didn’t mention my parents,” he said, “their dedication to passing on the faith, their own generosity and sacrifices to have eight children, my mom giving up her career to pass on the faith directly in homeschool, and especially in how we lived as a Catholic home.

“The daily rosary that my family prayed was especially impactful.”

A member of St. Antoninus Parish with his parents, David and Janet Willig, his siblings (including a  brother at the seminary), he also had the positive influence of his well-known uncle, the late Father Jim Willig. He holds a bachelor’s degree in business from Thomas More College and a master’s in business from Xavier University.

Deacon Andrew J. Smith, a former Air Force officer, holds an MBA from the University of Dayton. He said he pursued his vocation because, “God kept calling me to go, and He is still calling.”

The son of Tom and Mary-Alice Smith of  St. Luke the Evangelist Parish in Beavercreek, he is a graduate of Carroll High School and has six siblings.

“I am utterly humbled that God would choose someone like me to join His priesthood,” Smith said.

Jarred Kohn, son of Gerry and Connie Kohn, members of St. Mary, Philothea, Coldwater, worked as a welder after high school and surprised his mother when he applied to attend Bishop Simon Brute College Seminary in Indianapolis.

He has only one sibling, a married sister, and his mother had some doubts. “With only having two children, I was selfish, I wanted grandchildren. But we have been blessed beyond our dreams,” she said. Understanding their son’s vocation deepened their own faith, she said, and following his years at Simon Brute and Mount St. Mary’s showed them that his discernment was the right one. “He is so happy. Seeing him with the other seminarians, he is where he needs to be.”

May 19, 11 a.m., St. Peter in Chains Cathedral
Reception follows in the catheral undercroft; first parish assignments will be announced at the Mass. 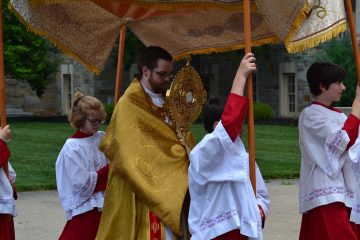