August 16, 2022 The Catholic Telegraph
Home»Commentary»Millennials at Mass: To whom shall we go?
Commentary 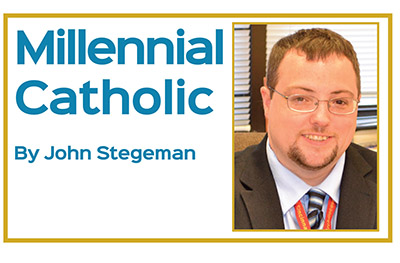 Millennials at Mass aren’t aren’t extinct, but they seem to be an endangered species.

A recent Pew Research Center study noted that in 2014, just 16 percent of millennial Americans identified themselves as Catholic.

According to Pew, Catholic numbers have declined thusly among the generations. In the Silent Generation, 24 percent claim Catholicism. With the Baby Boomers it’s 23 percent and with Generation X it’s 21 percent. The millennial drop off is a big one.

Extrapolating that data (albeit in a very unscientific manner) suggests something like four percent of of Millennials go to Mass every Sunday.

For a look a why more millennials don’t go to Mass, click HERE.

Luke Carey, assistant director of the Office of New Evangelization for the Archdiocese of Cincinnati said four percent sounds about right. Though the data isn’t encouraging, he sees hope in the millennials that do practice, and the possibility that their light can shine brightly enough to attract others.

“One of the things that is really exciting is the ones who go, they’re all in. They really are,” Carey said. “That’s where the importance of Christian joy really comes in and the importance of community. I think that’s how a lot of millennials evangelize their peers is just through inviting them into a community and hanging out with them.”

So what is it about the millennials that still see the faith as a priority? When most of their generation shuns organized religion, what brings 20 and 30-somethings to a 2,000-year-old faith? I asked them via my personal and professional social media accounts and managed to get responses from millennials all over the country.

A respondent from Nashville, Tenn. said she goes for a relevant message from her pastor. A Polish man from New Jersey added, “In a world that moves a million miles an hour, just five minutes in a church slows down life & adds perspective.”

An expectant mother from Cincinnati in her mid-20s took a journey away from the Church, but came back after meeting her husband and realizing they wanted their children to take the faith more seriously than they did.

Most answers among those who attend Mass regularly, however, don’t sound specific to the millennial generation.

“I go to Mass because I believe,” said a 29-year-old first-generation Korean American and former Pentecostal. “I believe that the Catholic Church is the Church founded by Christ. I believe that the Pope, the successor of Peter, is Christ’s vicar on Earth and that the bishops are the successors of the apostles. But most of all, I go to Mass because it is there that Christ is truly present body, blood, soul and divinity.”

While the preceding quote effectively explains the position of most believing Catholics, a 30-year-old Columbus resident summed up the implications.

“What would be the alternative to going to Mass?” he asked, before quoting from John chapter 6.

“It comes down to authenticity,” Carey added. “Catholicism has a lot of weight. We live in a BuzzFeed-ish culture where it’s always the “Top 5 things” you need to have a great life, but the weird part is that’s ultimately shallow. Catholicism, through the tradition of the Church, has an incredible amount of depth.”

The millennials in the pews are “all in” for a reason. They believe the Church is what it claims to be.

Being Catholic is hard. Being a faithful Catholic as a millennial means bucking cultural trends (not using birth control and making sure to get to Mass, for example) and going against your peers. Our first pope, St. Peter, doesn’t qualify as a millennial by birthdate but he understood what this feels like.

Many disciples left when Christ, in the aforementioned John Chapter 6, told them they must eat his flesh and drink his blood to gain eternal life. Even to the apostles, this was a difficult teaching to understand. As people walked away, Jesus asked the 12 if they would leave him as well.

In John 6:68 Peter gives the perfect response. “Simon Peter answered him, “Lord, to whom shall we go? You have the words of eternal life.”

Peter gets it. And so do the millennials that make the faith a priority. When so many “don’t get it,” what’s a millennial, or believing Catholic of any age to do?

Our Lord said, “Therefore go and make disciples of all nations, baptizing them in the name of the Father and of the Son and of the Holy Spirit, and teaching them to obey everything I have commanded you. And surely I am with you always, to the very end of the age.”

It doesn’t matter how old or how young you are. Once you come to believe that the church is true, what’s the alternative?

Nothing else can measure up.

In this Extraordinary Jubilee Year of Mercy, the Works of Mercy can provide concrete ways for the serious faithful to obey Christ’s command to evangelize. If you want to reach the those more lukewarm or ambivalent about the faith, or even those who don’t believe, the best way is imitating the love of Jesus, and the Works of Mercy can help do that.

The Corporal Works of Mercy are feed the hungry, give drink to the thirsty, clothe the naked, shelter the homeless, visit the sick and imprisoned and bury the dead. The Spiritual Works of Mercy are to instruct the ignorant, counsel the doubtful, admonish sinners, bear wrongs patiently, forgive offenses willingly, comfort the afflicted and pray for the living and the dead.

For a commentary on the need for a Year of Mercy and the importance of the Works of Mercy, see Father Earl Fernandes’ column from December of 2015. 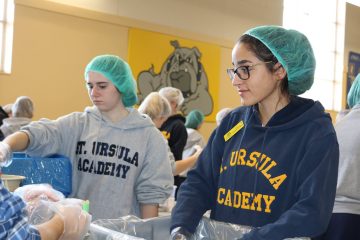