Fr. Paul Hartmann, a priest of the Archdiocese of Milwaukee, has been named the Associate General Secretary of the United States Conference of Catholic Bishops, it was announced Thursday.

Fuller, who was elected to the position of general secretary at the Fall 2022 USCCB General Assembly, appointed Hartmann as his associate.

Fuller praised Hartmann for his “background in communications, the practice of canon law, and pastoral experience.”

“He will be a great addition to the staff of the Conference, and I look forward to working with him,” said Fuller.

As associate general secretary, Hartmann will be the administrator of the conference’s pastoral offices and will be a member of the USCCB’s executive staff.

Hartmann was ordained to the priesthood in 1994, and received a licentiate in canon law from the Catholic University of America. Since 2003, Hartmann has served as the judicial vicar for the Metropolitan Tribunal in Milwaukee.

In addition to his positions as pastor throughout the archdiocese, Hartmann was also the president of a Catholic high school.

He is currently pastor of St. Monica parish in Whitefish Bay, and St. Eugene parish in Fox Point. 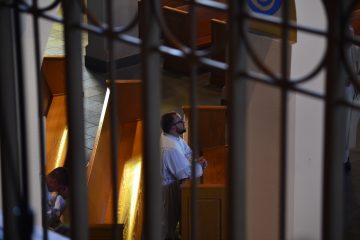