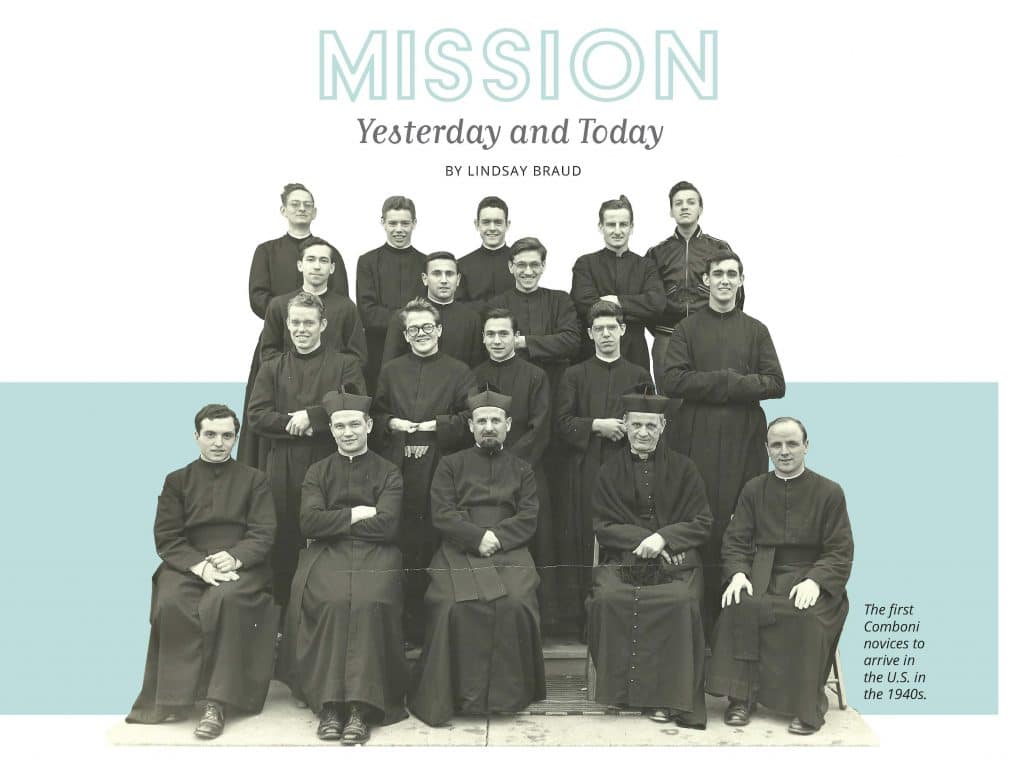 What we know and experience as “mission” today is different from the mission of 500 years ago, or even 80 years ago. Under the auspices of Vatican II, the Church’s definition of mission changed, stripping away the colonial mindset and replacing it with the local Church.

When missionaries first arrived in the Americas and central Africa they not only converted others to the faith, they also imposed European social and cultural practices on the new Christians, in effect erasing their culture.

Today, “missionaries work in partnership with the people, enabling them to take charge of their own faith and community life,” wrote Comboni Missionary Father John Converset, MCCJ. “Most missionaries are now aware that every culture needs to be evangelized. In each culture, they value the positive elements which prepare it to receive the Good News.”

Incorporating local traditions into the Catholic faith happens in many ways. For more than 150 years, the Comboni Missionaries have enculturated themselves into the communities they serve. It starts simply, by first learning the local language.

Mission work today isn’t just about “winning souls” or “saving the lost.” Prior to Ad Gentes, the Second Vatican Council’s decree on missionary activity, most missionaries simply condemned other faiths as idolatrous and in error.

Fortunately, the Church’s attitude towards other faiths has evolved. “Today, missionaries are more willing to enter into dialogue with believers of other faiths. They recognize that the [Holy] Spirit has been at work among all peoples and there is much for Christians to learn from others,” wrote Father John Converset, MCCJ.

In Chad, where only 20-percent of the population is Catholic, disagreement between religious communities is common. That’s why, in 2006, Comboni Missionaries opened Abraham’s Tent, an interfaith center working to support Islamic-Christian dialogue. There, young people from diverse backgrounds can learn to overcome religious prejudice through lectures, debates and team-building exercises. This type of work would have seemed unfathomable prior to the 20th Century, and yet it is fundamental for healing broken communities.

A missionary must be flexible and willing to listen. This is especially true for Comboni Missionaries. When they first arrived in the U.S. in 1939, their mission was to support the African American Catholic communities in Cincinnati’s West End. Over the decades, their mission has changed.

With the construction of Interstate-75 and urban renewal plans from the city, came the destruction and displacement of the African American neighborhoods, including Holy Trinity parish. The Comboni Missionaries continued serving in parishes like St. Michael’s in Lower Price Hill, but in time, that parish also closed. It was time for a shift in ministry.

Who knows what the mission will look like in 20-years? Whatever changes arise, the Comboni Missionaries will be ready to serve.