‘No religious affiliation’ now describes nearly fifth of US population

WASHINGTON – People who say they are unaffiliated with any religion constitute nearly 20 percent of the American public, making them almost as numerous as Catholics, who accounted for 22 percent of participants in a new Pew Research Center study released Oct. 9.

The survey of 2,973 adults conducted this summer found people who say they are atheist, agnostic or “nothing in particular” grew by almost 5 percentage points since 2007, from 15.3 percent to 19.6 percent of the population.

The greatest shift toward “nothing in particular” apparently came from Protestants, who now make up 48 percent of the population, compared to 53 percent in 2007, the telephone study found.

“These are not necessarily nonbelievers,” said Greg Smith, senior researcher for the Pew Forum on Religion & Public Life, at an Oct. 9 discussion on the study hosted by “Religion & Ethics Newsweekly,” a PBS TV show. “They’re just not associated with any faith in particular.”

Kim Lawton, managing editor for “Religion & Ethics Newsweekly,” said although the study shows that the vast majority of Americans still are affiliated with a faith, the report stands out for the rapid growth it shows in the unaffiliated segment. The program planned a three-week series on the study starting Oct. 12.

The study found declines since 2007 of 1 percent among those who say they are Catholic, 3 percent among white mainline churches, 2 percent among white evangelical churches and no change among black Protestants, Mormons or Orthodox. Those who said they identify with “another faith” grew over the five-year period, from 4 percent to 6 percent of the survey.

Smith said the majority of those in the unaffiliated category say they believe in God and think of themselves as religious or spiritual. They are less likely to pray than the general public (58 percent pray daily and 21 percent do so weekly/monthly), but 42 percent of the unaffiliated category said they pray somewhat regularly (21 percent daily and 20 percent weekly/monthly).

Nor are the unaffiliated necessarily hostile toward religious institutions, Smith noted. But they’re not searching for a religious home, either, he added. He said the growth in the number may in part be attributed to a societal change that has reduced the potential stigma of not belonging to any faith institution.

The study asked both the unaffiliated and those who said belong to a particular faith why they don’t attend religious services more often. Among unaffiliated people, the most frequent answers related to disagreements with the church, such as: “don’t agree with religion,” “it’s not necessary to attend church,” or “my church isn’t strict enough.”

People who are affiliated with a religion were most likely to list personal priorities and practical difficulties, such as “too busy” or “work conflicts” as their main reasons for not going more often.

Other panelists at the “Religion & Ethics” event focused on the political dynamics related to the growth of the “unaffiliated” segment of society. Sixty-three percent of religiously unaffiliated registered voters identified themselves as Democrats or said they lean toward Democrats. Twenty-six percent said they are Republican or lean Republican.

Mike McCurry, former press secretary to President Bill Clinton, is now a political consultant and a graduate student in theology at Wesley Theological Seminary. He said the survey suggests the growth of the unaffiliated segment “is a message less to political parties than it is to churches.”

Demographically by most measures and on some issues raised by researchers, the unaffiliated segment reflects views similar to the country as a whole. But on a handful of issues they stood apart. For instance they generally reflect national educational attainment and income levels and hold views similar to the general public on smaller or bigger government. 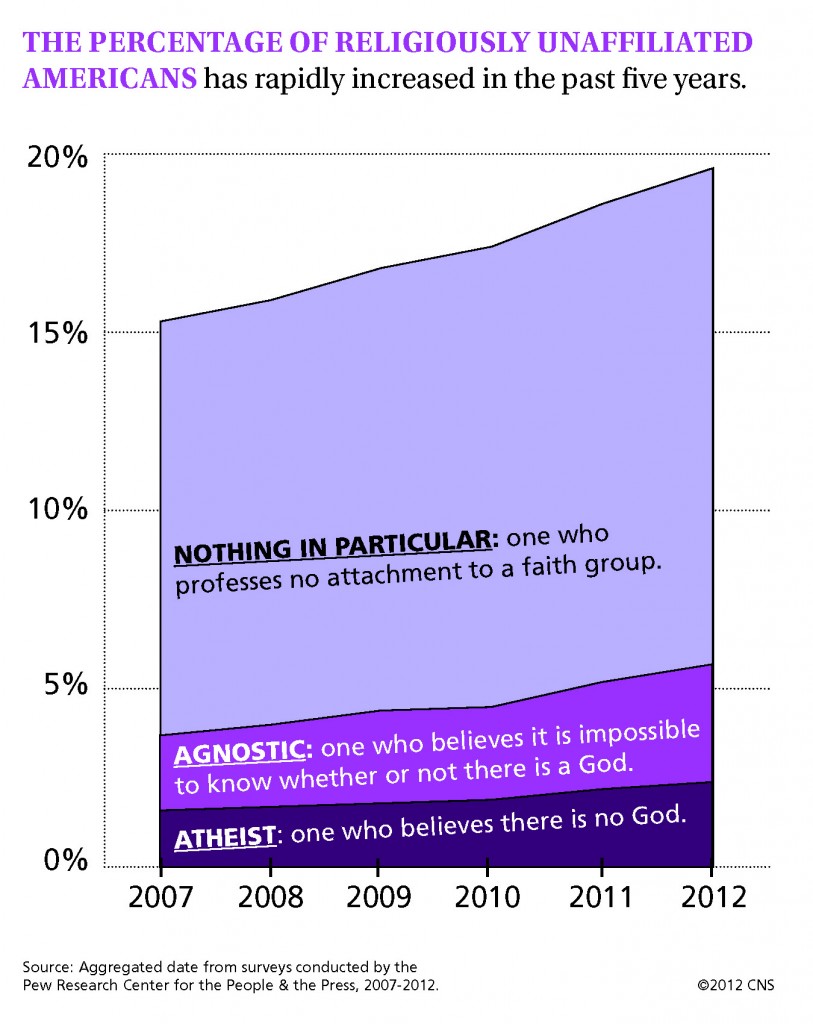 Archbishop: New evangelization 'must begin in your hearts and in mine'

Putting out into the 'digital' deep, 'My Year of Faith' app goes live

‘No religious affiliation’ now describes nearly fifth of US population

Throwback Thursday: Make a newspaper into a papal miter