A dress worn by Judy Garland in her classic role as Dorothy in “The Wizard of Oz” is now the main character in a surprise drama. Supporting characters are the Catholic University of America and some relatives of a priest and former professor who, they say, would have wanted his relatives to own the rare collectible, not the university.

The university had planned to auction the dress to fund its drama school. These plans were delayed by a legal challenge from Wisconsin resident Barbara Ann Hartke, 81, a niece of Father Gilbert Hartke, O.P., the founder and head of the university’s drama school. She says that the dress should be hers because she is the priest’s closest living relative.

Barbra Ann Hartke’s attorney, Anthony Scordo, told WTOP that there has been “absolutely no legal documentation of such a gift to the university” in any of its court filings. Her lawsuit also objects that the university did not contact her when the dress was rediscovered.

“I was just surprised after all this time, here it had been found, and here it is being rushed off to the auction house,” Barbara Ann Hartke told the New York Post earlier this month. Tony Lehman, a grand-nephew of Father Hartke, also supports the lawsuit.

The university contends the objecting relatives have no case. The university’s attorneys argue the dress was given to the priest in his capacity as a drama professor at the university. The university further notes that Father Hartke, as a vowed Dominican, was not allowed to keep personal possessions.

“We look forward to the opportunity to present the overwhelming evidence, including a statement from another family member, supporting Catholic University’s ownership of the dress to the court next week,” a Catholic University of America spokesperson told CNA May 17.

“The university’s position is that the allegations in the lawsuit have no basis in law or fact because Catholic University is the rightful owner of the dress and Father Hartke’s estate does not have a property interest in it,” the spokesperson said.

Mercedes McCambridge, an Oscar-winning actress and artist-in-residence at Catholic University in 1973, had given the dress to Father Hartke, who died in 1986. In the late 1980s, the dress went missing and the costume became the subject of rumor. Matt Ripa, a lecturer and operations coordinator for the university’s drama department, happened upon a bag atop faculty mailboxes in 2021. He opened the bag to find a shoebox, inside of which was the dress.

The university had scheduled an auction of the dress in hopes of raising more than $1 million for its drama department.

New York U.S. District Court Judge Paul Gardephe placed a temporary restraining order on the auction pending a hearing the day before the dress was scheduled to be auctioned through the auctioneer company Bonhams.

According to Bonhams, the actress Judy Garland wore the gingham dress while filming a scene in which her character Dorothy Gale faces the Wicked Witch of the West in the witch’s castle.

The dress from the 1939 classic movie is one of only two existing dresses that retains its white blouse. It is now valued at an estimated $800,000 to $1.2 million, Bonhams said. Another surviving dress was auctioned for $1.5 million in 2015.

Father Hartke was one of six siblings. Catholic University of America has gathered the testimony of other relatives to support its case that it is the owner of the dress.

Thomas Kuipers, a grand-nephew of Hartke, said the priest told him “that I could not have it as the dress belonged to Catholic University.” He said he and other descendants of Father Hartke’s sister Inez Mercedes Hartke support the auction of the dress donated to the university.

William Largess, who was an undergraduate student in Catholic University’s drama department from 1972 to 1976, said he was with the priest “multiple times” when he took out a dress to show to students that Largess understood was a dress from “The Wizard of Oz.”

“I specifically recall Father Gilbert V. Hartke saying that Ms. Mercedes McCambridge gave the dress to the Department of Drama at Catholic University,” said Largess, who is now an adjunct theater professor at George Washington University.

Father Kenneth R. Letoile, O.P., the Prior Provincial of the Province of St. Joseph, described the Dominican approach to the vow of poverty.

If anything was given to him in his personal capacity, he would have been required to donate to his province “in accordance with his vows and solemn profession.”

Letoile said that the Dominican province does not assert any right to the dress.

“I hereby affirm on behalf of the province the Catholic University of America’s full ownership of the dress,” he said.

When the auction of the dress was announced in April, the Catholic University of America said it had documentation which indicates that the dress was gifted to Hartke with the intention it be used to support the drama department.

If the auction goes forward, proceeds from the sale will endow a faculty chair, a position that will support the current bachelor of fine arts degree in acting for theater, film, and television, as well as the development of a new formal film acting program at the university’s Benjamin T. Rome School of Music, Drama, and Art.

June assembly a chance for U.S. bishops to grow ‘intellectually, pastorally, and spiritually’

Who, or what, is ‘Jane’s Revenge’? A look at the group invoked in pro-abortion vandalism 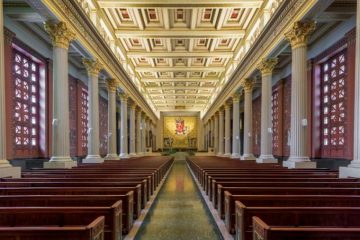