He was born on August 10, 1945, in Cincinnati, and baptized at St. Martin of Tours Parish, Cheviot (Cincinnati). He did his preparatory studies at St. Gregory Seminary and studied theology at Mount St. Mary’s Seminary of the West in Norwood, Ohio. He was ordained on May 29, 1971, at the Cathedral of St. Peter in Chains in Cincinnati by Archbishop Paul F. Leibold.

Father Kosse received his first assignment on June 17, 1971, as Assistant at St. Peter Parish, Dayton and part time faculty at Carroll High School, Dayton. On July 16, 1971, he was appointed Assistant Communications Coordinator for the northern section of the archdiocese. On September 30, 1971, he was appointed Director of Public Relations, Radio and Television Programs within the archdiocese, Assistant Chaplain of the University of Cincinnati Newman Center (1971-1973) and Assistant at Assumption Parish, Walnut Hills (Cincinnati) (1971-1979). He was appointed full time to the diocesan Communications Office, effective June 20, 1973. On July 1, 1979, he was appointed in residence at St. Andrew Parish, Avondale (Cincinnati), while continuing as Director of Radio and Television. On December 1, 1981, he was appointed Priest-Coordinator for the Community of Hope (a non-territorial parish) and Associate ad cautelam of St. Leo Parish, Cincinnati, while continuing as Director of Radio and Television and in residence at St. Andrew Parish. Father Kosse was appointed Director of the Communications Office on January 9, 1987 (1987-1989). He was appointed Pastor of St. Peter Parish, New Richmond on July 7, 1989. He was appointed to the College of Consultors in November 1990 until November 1995. He was reappointed to another six-year term as Pastor of St. Peter Parish commencing on July 8,1995, and reappointed to the College of Consultors for another five year term from November 1995 until November 2000. On July 1, 2000, he was appointed Pastor of Holy Trinity Parish, West Union, and St. Mary Queen of Heaven Parish, Peebles, for a period of six years. He was appointed Dean of the St. Martin Deanery, effective January 1, 2001, for a four-year term, ending December 31, 2004, then reappointed for another four-year term ending December 31, 2008. He was appointed Temporary Parochial Administrator of St. Mary Parish, Hillsboro, effective July 18, 2005. Father Kosse was reappointed as Pastor of Holy Trinity and St. Mary Queen of Heaven Parishes for two additional six-year terms, commencing on July 1, 2006, and again on July 1, 2012. Father Kosse retired from active ministry on July 1, 2014.

Visitation Gathering: immediately following the Memorial Mass in the lower level of the church.

There will be no burial at this time because Father Kosse has donated his body to science.

Christ the King and the Myth of the "Wall of Separation" 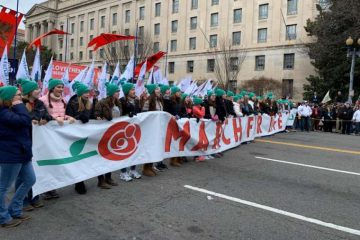