ADRIAN, MICHIGAN —February 8, 2021—Sister Marie Therese Emery, formerly known as Sister Thomas More, died on Friday, February 5, 2021, at the Dominican Life Center in Adrian, Michigan. She was 97 years of age and in the 74th year of her religious profession in the Adrian Dominican Congregation.

Sister spent 24 years ministering in education in Detroit, Lansing and Dearborn, Michigan; Chicago, Illinois; and Cincinnati and Cleveland, Ohio. She was Principal at Presentation in Detroit, St. Henry in Cleveland, and St. Vincent Ferrer in Cincinnati. Sister later worked for the State of Michigan, where she was a Fleet Safety Project Supervisor, and at Michigan State University, where she was a traffic safety specialist for two years, a traffic safety program administrator for 11 years, and a technology lab director for 10 years. She was also an engineering/automotive consultant for AAA for a year in Washington, DC. Sister became a resident of the Dominican Life Center in Adrian in 2012.

Sister ministered in the Archdiocese of Cincinnati for three years: 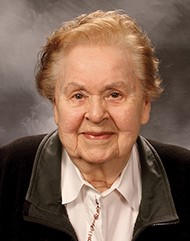