SAN SALVADOR, El Salvador (CNS) — Pope Francis warned bishops from across the Western Hemisphere that corruption poses a grave threat to the people of Latin America. He also reiterated calls for the church to work closely with people to renew their hope.

In a letter to the Latin American bishops’ council, or CELAM, meeting in El Salvador through May 12, Pope Francis said corruption “is one of the most serious sins that plagues our continent today.”

“Corruption devastates lives by immersing them in the most extreme poverty. Corruption, which destroys entire populations by subjecting them to precariousness. Corruption that, like a cancer, consumes the daily life of our people. And there are so many of our brothers and sisters who, admirably, go out to fight,” he wrote.

The Argentine pope used the story of Our Lady of Aparecida, considered the principal patroness of Brazil, to emphasize his message of hope. The statue was said to have helped bring faith — and a bountiful catch — to three fishermen when they found it in the mud 300 years ago.

“Even today, 300 years later, Our Lady of Aparecida makes us grow” by making people disciples, he wrote.

“In Aparecida, we find the dynamics of a believing people that confess themselves to be sinners and are saved; a people, strong and resilient, that are aware that their lives are full of a presence that encourages them not to lose hope; a presence that hides in the daily life of the home and the family, in those silent spaces in which the Holy Spirit continues to support our continent,” he said.

The pope repeated his calls for the church to work closely with the people, including those on the peripheries.

“I reiterate to you what I wrote in ‘Evangelii Gaudium,'” he wrote, referring to his apostolic exhortation on proclaiming the Gospel in today’s world: “I prefer a church that is bruised, hurting and dirty because it has been out on the streets, rather than a church that is sick from being confined and from clinging to its own security.”

The letter was released by the bishops on the first day of a gathering that brought together representatives from 21 Latin American and Caribbean countries, the United States and Canada. The participants planned to discuss immigration and crime, the possibility of organizing a synod of the Americas, and commemorations of Blessed Oscar Romero, the San Salvador archbishop who was killed in 1980 while celebrating Mass. He would have turned 100 years old this August. 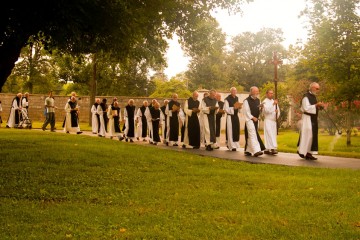