It was the death of a loved several years ago that inspired Fernanda Moreira, a member of St. Dominic Parish in Delhi, to begin a prayerful and faith-filled apostolate.

Just after Thanksgiving in 2003, recalled Moreira, her sister-in-law, Roselina, was admitted to the hospital. The family was soon devastated to learn she had cancer.

In praying at her sister-in-law’s bedside, Moreira said she and her family members “could feel in our hearts how much she loved the spiritual consolation provided by our prayers. I’m so grateful to God for giving us this precious time to spend with her.”

Her sister-in-law passed away peacefully on Valentine’s Day, her favorite day, and, said Moreira, “immediately after her death, I realized how much those who are dying need our prayers. I knew I wanted to do something to help others who were approaching death. To my surprise, another sister-in-law, Lourdes, had the same idea.”

The women began meeting once a week at St. Dominic at 3 p.m., the hour of mercy, to prayer the Divine Mercy Chaplet, the rosary and other prayers. Soon, several others began joining them and they decided to collect their prayers in a booklet. The result was the foundation of the Apostolate for the Dying, the goal of which is daily prayer for the dying all over the word, and the publication of the “Holy Hour Devotion for the Dying” booklet, which contains prayers compiled from both traditional and original sources.. It features opening and closing prayers, the mysteries of the rosary, a Litany for the Dying, a prayer to St. Joseph, patron of the dying, the Holy Trinity Prayer for the Dying, among others, as well as supplemental prayers.

Archbishop Dennis M. Schnurr offered his support for the apostolate and first edition of the book in a November 2009 letter to Moreira, saying, “I thank you for the great love and compassion you show our brothers and sisters as they approach the end of their earthly life.”

Father Jim Walsh, pastor of St. Dominic, has encouraged and guided the development of their ministry, Moreira said, suggesting information about it be published in the church bulletin. As word of the apostolate spread, others outside the parish were inspired to become involved, including Annamarie Short, a member of Good Shepherd Parish in Montgomery, and Patrick Flanigan, then a local nursing student. Through their involvement, a website for the aposolate was developed and a revised edition of “Holy Hour Devotion for the Dying,” featuring additional prayers and art work, was published.
”Fernanda has said this is not our ministry, it’s God’s ministry, and I believe that,” said Short. “I love praying this devotion, and praying it in a group adds to its strength.

Last November, Auxiliary Bishop Joseph R. Binzer, who granted the Imprimatur (permission to publish), expressed his endorsement for the booklet’s revised edition in a letter to Moreira, saying, “I am blessed to encourage prayers for the dying, something the universal church already promotes (Catechism of the Catholic Church, para. 2299), through the use of this booklet,” and noting that it “offers a very beneficial, effective and caring way for people to help those who are dying through prayer.”

The apostolate continues to expand locally and beyond. Prayer groups are now using the booklet at Cincinnati area parishes that include Our Lady of Victory, St. Teresa of Avila, St. Antonius, St. Lawrence and Our Lady of Lourdes. It is also being used by two local hospices and has been distributed to parts of Florida, Virginia, Indiana, Washington, D.C., Texas and South Carolina, and as far away as Portugal, Nigeria and the Philippines. To date, more than 500 copies of “Holy Hour Devotion for the Dying” have been distributed, and it has been translated into Portuguese and German. A Spanish translation in the process.

”We have received wonderful feedback on the booklet,” said Moreira. “Often, people are afraid of death, but their loved ones have told us how much comfort and consolation they received from these prayers.”

Besides the support and comfort she can offer others through her ministry, she said it is also meaningful on a very personal level.

“The best way I can be prepared for my own death is to pray for the dying,” Moreira explained. “That is the greatest act of charity I can do for those who are going before me, and consequently for me, when my hour comes.”

For more information, to order copies of the booklet or support the apostolate, visit www.Apostolateforthedying.org.

A private showing of "For Greater Glory"

Way of the Cross: The Ninth Station 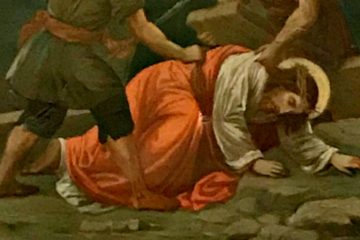