September 23, 2022 Greg Hartman
Home»Commentary»Q&A: What ever happened to purgatory?
Commentary 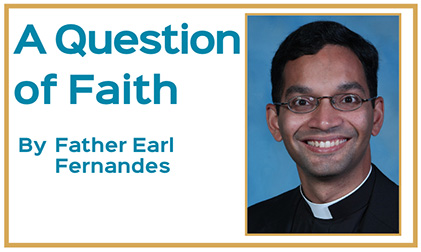 Dear Father: What happened to Purgatory? Haven’t heard about it for decades. Did it go away? What are the past and current teachings of the church on the subject?

Dear Reader: Thank you for your question. Purgatory is still very much a part of church teaching. In paragraphs 1030-1032 of the Catechism of the Catholic Church, the teaching on Purgatory is explained. In 2011, while speaking about Catherine of Genoa, Pope Benedict XVI described Purgatory as a process rather than a place. “Purgatory is like a purifying fire burning inside of a person, a painful experience of regret for one’s sins.” Sometimes we hear of the “Temporal Punishment” due to sin.

What Pope Benedict says about this is that sorrow for sin is itself some of that punishment. We all regret some of the things we have done. Purgatory is how that regret is purged from our lives so that free from the consequences of those sins we might enter freely and fully into the joy of the Kingdom of Heaven.

Pope St. John Paul II in his General Audience of Aug. 4, 1999, addressed the issue of Purgatory, stating, “For those who find themselves in a condition of being open to God, but still imperfectly, the journey towards full Beatitude requires a purification, which the faith of the church illustrates in the doctrine of Purgatory.” Pope Francis implicitly teaches about Purgatory by offering indulgences for following World Youth Day on twitter” (July 2013) or for participation in the Year of Mercy by making a pilgrimage through a Door of Mercy. An indulgence is the “remission of temporal punishment due to sin.” Indulgences may be offered for the dead as well as the living. In offering indulgences for the dead, we acknowledge that there is still a bond of friendship and love between the living and the dead whose suffering in purgatory can be mitigated by the prayers and good works of the living.

Scripture testifies to this as well in 2 Maccabees 12:39-45. Judas Maccabeus had the people offer sacrifice for the dead that “their sins may be atoned for.” The passage continues by saying that if he did not believe that prayers for the dead could atone for the sins of the dead, it would be foolish but if they did, it would be “a holy and wholesome thought.” The teaching of purgatory is an ancient and biblical concept that still exists in Jewish prayer and practice. The idea that the teaching is a creation of an active medieval Catholic imagination is simply false. In 1 Corinthians 3:12-15, Paul talks about the purifying fire that is part of the journey into the kingdom: “He will be saved but as through fire.”

The Council of Trent testified to the church’s ancient teaching on Purgatory. Trent says, “If anyone says that after the grace of Justification has been received the guilt is so remitted and the debt of temporal punishment so blotted out for any repentant sinner, that no debt of temporal punishment remains to be paid, either in this world or in the other, in Purgatory, before access can be opened to the Kingdom of heaven, let him be anathema.” The teachings of the Ecumenical Councils are part of the continuing understanding of the faith.

Purgatory is, not a relic of the Catholic past but a living and helpful component of the Catholic faith. It presents an opportunity for each of us to have a loving, helpful relationship with those who have gone before us and gives encouragement in the experiencing of our own suffering. We have Masses for the dead to offer them our care and our prayers for their final liberation from the temporal punishment due to sin. This places the person in a true relationship to God as creatures who are less than perfect and who are truly “poor souls,” needing the support, love and care of the whole church to fully realize the great gift God has prepared for those who believe.

This A Question of Faith column first appeared in the March 2016 print edition of The Catholic Telegraph. This column was Father Fernandes’ final installment. The column will resume in July 2016 under the authorship of Father David Endres.

God is greater than our sins, pope says at general audience