By the time Archbishop Alter and Purcell Marian high schools reached their respective girls basketball state tournament finals on March 12, they were ready to make a statement. In Division II, Alter left no doubt with a 54- 38 victory over Thornville Sheridan, while in Division III, Purcell Marian dispatched Worthington Christian 62-38.

Alter’s state championship, the school’s fifth, relied on three seniors’ leadership, standout sophomore Riley Smith, and a team-first attitude. “They were a unique group nowadays in that they were very selfless,” said Christina Hart, Alter co- coach with Kendal Peck. “They played hard every night for one another, which is very unusual. It made it really a fun experience for everyone and allowed us to really be a team.”

Hart said the team also excelled academically this year, living up to the high standards of Alter’s Catholic education.

“Almost all of them grew up in the Catholic feeder schools,” she said. “They’re well rounded and they’re very motivated to achieve that kind of success.”

This year’s state championship games were played at the University of Dayton’s UD Arena, just six miles from Alter’s campus. Alter fans made good use of the short drive.

“The support of everyone at school and the community, especially Alter’s alumni, made it so special,” said Smith, whose performance earned a spot on the All-Ohio third team. “The support during tournament time really showed how special Alter is. You could tell they wanted us to win, and they would be there every step of the way.”

For Purcell Marian, this was their first girls basketball state championship, thanks in part to freshman phenom Dee Alexander. The 6-foot-1 underclassmen averaged 24.5 points and 12.2 rebounds this season and outpaced those averages in the final with 25 points and 16 rebounds. While still a freshman, Alexander has scholarship offers to more than 28 Division I colleges. She was named Division III Player of the Year and made first team All-Ohio. The team is doubly blessed, though, as freshman Ky’Aira Miller earned an honorable mention for the All-Ohio teams.

With seven freshmen on the roster, the team’s youth was a concern for coach Jamar Mosley, but it never became an issue. “Their chemistry meshed together really well,” he said. “Even as well as we played during the summer, I thought, ‘We’re so young.’ We started five freshmen in our first game!

These girls really cared about each other. As special of a talent as Dee Alexander is, she has so much trust in her teammates. Whether it was Jayda Mosley who hit 100 threes this year, or Ky’Aira Miller who was the point guard, they all just really trusted one another on and off the floor.”

Their success stemmed in part from their work ethic, which is evident academically. The team’s first semester collective GPA was 3.5, improving to 3.7 by season’s end. Mosley believes his basketball program includes several valedictorian candidates.

“We got pretty good basketball players but quite a few amazing students in our program,” he said, adding that the young team prayed before each practice and game.

With only one graduating senior, Purcell Marian looks to be a contender for a championship next year as well, but Mosley hopes for success in more than just basketball.

“It’s pretty surreal,” he said of expecting most of his team to return next season. “Hopefully they get better in every aspect of their lives, academically, spiritually and athletically. It’s pretty amazing to know I’ll get to see these girls grow.”

April 26: Our Lady of Good Counsel 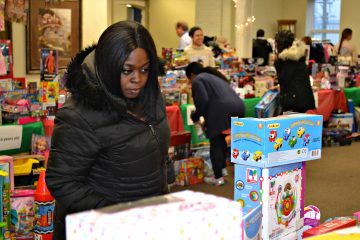