Washington, D.C. Newsroom, Jun 3, 2020 / 05:00 pm MT (CNA).- Pro-life advocates must speak out in defense of all human life–including issues of racial justice and deaths at the hands of police, a prominent pro-life lawmaker told CNA Wednesday.

Louisiana state Senator Katrina Jackson told CNA in a June 3 interview that the pro-life movement “has made great strides in becoming more racially diverse” and should now be speaking out against racism and the killings of black men by police or by other people who target them for their race.

A nationally known pro-life Democrat, Jackson addressed the national March for Life in Washington, D.C. in 2019 and 2020. She served eight years in the Louisiana House before she became a state senator this year.

Jackson, who is black and a Baptist, spoke to CNA about racism, and the nationwide demonstrations that have taken place, including violence in some cities, in the wake of the death of George Floyd on May 25.

The lawmaker said pro-lifers cannot remain silent in the face of injustice. She quoted Dr. Martin Luther King, Jr., noting that “a time comes when silence is betrayal.”

Jackson, who has been lauded for her bipartisan efforts to pass some of the country’s most stringent restrictions on abortion, told CNA that she is “pro-life from conception until death.”

“I tell people that it’s not enough that we ask someone not to have an abortion and keep going.”

Protests began in Minneapolis last week after Floyd’s death in police custody. Video of his arrest showed Officer Derek Chauvin kneeling on Floyd’s neck as Floyd groaned, cried out, and repeatedly said he could not breathe. Chauvin has since been charged with murder, and other officers on the scene charged as his accomplices.

Demonstrations, along with rioting and looting, have followed in numerous U.S. cities and suburbs last week and into this week, with more than 9,000 people arrested. Protesters have clashed regularly with police forces in some cities, while in other cities, police leaders have supported or joined in peaceful protest marches.

Floyd’s death, Jackson said, came as he was arrested “by those who took an oath to protect and serve,”

She lamented the “alarming amount of African-American males that are killed by murderous hands,” including those killed by police officers. Such deaths, she said, are “a life issue.”

Racism, and the deaths of young black men, have been “plaguing our nation for years,” she said.

“It has to stop, because it goes directly against the pro-life stance that every life has value.”

“Right now, the pro-life movement could be holding very diverse online townhall meetings to discuss this issue,” she said, to “talk about life being important at every stage of life.”

Jackson also called for a more visible presence by pro-life advocates in peaceful protests, holding signs with language such as “life matters at every stage.”

“It’s as simple as that. Those are two things that we could be doing immediately, that I’m doing, to make sure people understand that we believe that innocent life should not be taken, at any stage,” she said.

While Jackson appeared with President Donald Trump at the 2020 March for Life, and has praised pro-life measures enacted by his administration, she expressed concern about the president’s response to the riots and protests.

“President Trump is doing more to incite and to perpetuate anger over this issue than he is doing to calm it down,” Jackson told CNA.

Last week, while threatening to deploy the U.S. military to quell riots, Trump tweeted that “when the looting starts, the shooting starts.” Jackson said the president’s words, under the guise of upholding law and order, might have exacerbated lawlessness.

“Of course I stand against the looting, but I also stand against lawless actions of those who are put in positions to protect and serve, and to serve constituencies—which he is,” she said of Trump. “And what he did when he stated that, he basically promoted a lawless action himself. And that’s what’s so problematic.”

The next day, Trump offered an explanation for his use of the phrase, saying that violent riots could lead to other acts of violence. “Looting leads to shooting, and that’s why a man was shot and killed in Minneapolis on Wednesday night,” he tweeted.

The tweet was nevertheless interpreted by many to justify police firing rubber bullets or live rounds at those protesters who are looting stores. “What the president needs to understand is that—as the leader of the free world—what he tweets, what he says, has great consequences,” Jackson said, adding that, in her view, Trump “needs to understand that.”

“And it’s becoming very disturbing,” she added, that “he seems not to.”

Jackson said that the idea a person might be shot in response to a theft “goes directly against what American laws, every criminal justice system in America stands for.”

She told CNA that the president’s comments could encourage some people to take the law into their own hands: “There may be someone who goes out and shoots someone who’s looting because the president said it’s okay,” Jackson worried.

On Wednesday, Pope Francis noted that he had “witnessed with great concern the disturbing social unrest in your nation in these past days, following the tragic death of Mr. George Floyd.”

“We cannot tolerate or turn a blind eye to racism and exclusion in any form and yet claim to defend the sacredness of every human life,” the pope said. “At the same time, we have to recognize that the violence of recent nights is self-destructive and self-defeating. Nothing is gained by violence and so much is lost.” 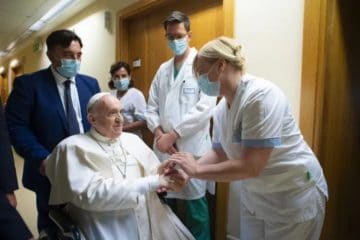