St. Michael School in Ripley is one of the best-kept secrets in Brown and Adams Counties, but its secret is beginning to spread.

The school has nearly doubled its student enrollment in the past three school years, going from around 60 students to 116 this school year, and St. Michael School Principal Andrew Arn said they’re poised to grow even more in the next few years.

“I think we’re trying to do things right,” said Arn, principal of the only Catholic grade school in Brown and Adams Counties.

They keep class sizes small, and they also focus on the arts. Arn said they have “an incredible music program,” and students learn the violin from first through eighth grades. They also focus on an visual arts program. “I know a lot of schools have cut that sort of thing, but we found it important to keep all of that.”

Expanding the School
The growth has forced St. Michael to undergo an expansion project of the school building it has occupied since 1923, a building that used to house nuns. Now the school is using “every part of this building, and we need more space,” said Arn. The side lots will help accommodate their space issues.

New construction will include adding a science lab, a classroom for religion and two bathrooms. The $150,000 new construction project comes on the heels of a remodeling project conducted in 2018, which created four new classrooms.

The construction and remodeling have allowed the school to separate grades, which they’ve done for first and second grades, and have the older grades separated for core classes, such as math and language arts. The third and fourth, fifth and sixth, and seven and eighth grades take religion, social studies, sciences and special classes together.

Serving a Community Need
St. Michael is about an hour’s drive from Cincinnati east along the Ohio River. It’s tucked away on the same hill as this historic Rankin House, one of the original stops on the Underground Railroad. The church is relatively landlocked in that hill, Arn said, so there are not many places to expand, and it’s unlikely the school will move.

“I think we’re definitely serving a need,” said Arn, adding that he believes they are a strong reason why people move to the area.

“When people see our students in the community, they see what our students are accomplishing and just what kind of kids they are,” he said. “I think more and more people want to be a part of that.”

“It feels like a big hug when you walk into the school,” she said. “You just get the feeling of family, and it feels safe and secure.”

Parents Kristin Depenbrock and Meghan Huffman said the lives of their children are forever changed because of the school.

“One of the things I love about St. Michael is how it’s positively impacted my family, my children,” said Depenbrock.

Huffman said religion is her son’s favorite subject, and he “learns so much every day.”

“Over dinner, he’s always sharing something from that class,” she said.

Arn said he and the faculty are “all trying to make the school a special place for the kids to grow up in.”

“We all believe that God created us for a very specific purpose, and finding that purpose is one of the things we are all tasked with in our lives,” he said. 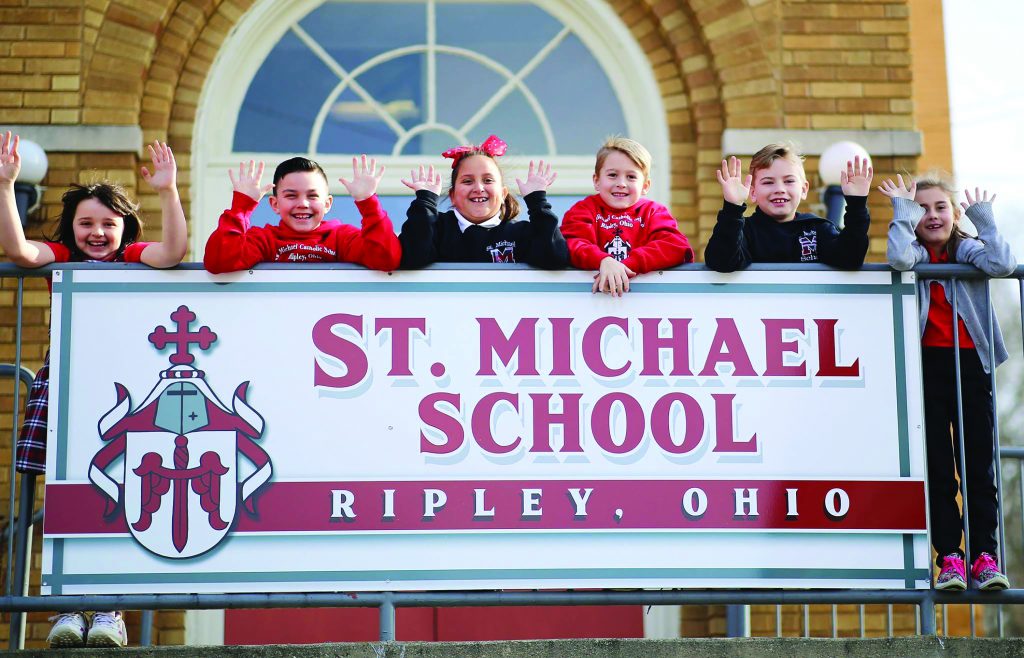