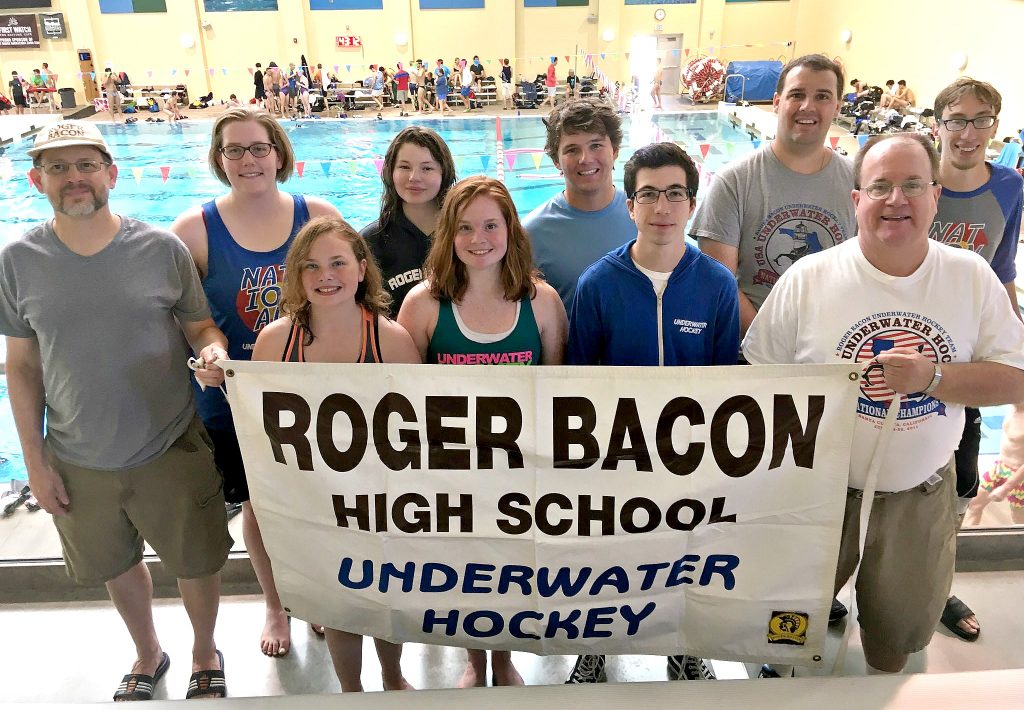 Incoming Roger Bacon senior and team president Conor Healy ‘20, says, “We have a very young team this year, and we are building for the future. We are happy to be going to the National Championships so that our younger players can gain valuable experience against tough competition. Nevertheless, it will be a fun tournament!”

Earlier this year in March 2019, the Roger Bacon Varsity Team finished in 6th place in the “B” Division at the University of Guelph’s annual underwater hockey tournament in Guelph, Ontario, Canada.

Roger Bacon’s head coach is Dr. Paul Wittekind, a member of the Roger Bacon High School faculty and the chair of the Social Studies Department. Mr. David Dozer is the team’s assistant coach. Dr. Wittekind came to Roger Bacon from The Ohio State University, where he and Mr. Dozer played on that school’s underwater hockey team.

Rooted in the Franciscan values of holiness and learning, self-discipline and compassion, Roger Bacon High School is a Catholic, co-educational high school that develops the hearts, minds and bodies of its students in a caring and challenging environment. Roger Bacon High School is a coed Roman Catholic high school run by the Franciscans in the Archdiocese of Cincinnati. Mr. Tom Burke ‘69 is the president of Roger Bacon, and Mr. Steve Schad is the school’s principal. For more information about the underwater hockey team, please visit http://www.rogerbacon.org/students-parents/student-activities/underwater-hockey .

BACKGROUND INFORMATION ON UNDERWATER HOCKEY:
Played in swimming pools, underwater hockey has co-ed teams with six players in the water at any given time, while four players are substitutes waiting at the end of the pool. Players may substitute freely during the game. Games consist of two 15 minute halves with a five minute halftime.

The three-meter-long goals are on the bottom of the pool at each end of the pool. Play begins with a “face off” in which both teams push off their respective walls toward the puck, which lies on the bottom of the middle of the pool. Each team passes the puck around, attempting to shoot the puck into the goal defended by the opposing team. This means that players must be good swimmers with the ability to hold their breath long enough for them to swim to the bottom of the pool, receive the puck, move with the puck while swimming along horizontally only an inch or so off the bottom of the pool, look for a teammate and pass off, before returning to the surface. While on the surface, players breathe through their snorkels, allowing them to remain face-down in the pool to watch the action beneath them and to re-enter play. On defense, players swim down in front of oncoming opponents to take the puck away and return to the offensive. After either team scores a goal, the puck is returned to the middle of the pool by one of the two in-pool referees and another face off resumes play with both teams again starting from their respective ends of the pool.

The mask allows the player to see the play in the pool, and together with the snorkel, protects the player’s face. Fins help the swimmer to move quickly through the water. USA Underwater Hockey, part of the Underwater Society of America (USOA), is the governing body for underwater hockey in the United States. USA Underwater Hockey requires that all underwater hockey players wear a water polo helmet and a mouthpiece that fits over the snorkel for the player’s safety. The water polo helmet is designed to protect a swimmer’s ears. Each player pushes the puck along the bottom of the pool with an approximately one foot long underwater hockey stick, made out of either wood or a plastic polymer. When playing games, underwater hockey teams are divided into black and white by the color of their sticks and their water polo helmets (the color of their swimming suits is not a factor). Each player also wears a single heavy-duty glove on their stick hand to protect their hand from contact with the bottom of the pool and the puck. The gloves are reinforced with duct tape over the last two knuckles of each finger to protect the hand from contact with the bottom of the pool; each glove is reinforced with caulk which strengthens the glove, protecting the hand from contact with either the puck or another player’s stick.

Success ultimately depends on teamwork, especially the ability to pass the puck among teammates. Individual strength is less of an advantage than it is in many other sports. The water nullifies pure mass advantage and emphasizes the clever use of torque to “throw” the puck with the stick when passing to a teammate or when scoring a goal. Important player qualities are overall physical fitness and conditioning and dexterity in handling the puck with their stick.