Saved from the flames: The treasures that survived the Notre Dame fire

Paris, France, Apr 16, 2019 / 08:00 pm (CNA).- When the Cathedral of Notre Dame in Parish caught fire Monday, most predicted the worst. It seemed unlikely the structure could survive, or that some of the treasures inside might be saved.

Indeed, a full two-thirds of the cathedral’s roof was destroyed in the blaze, as was the famous spire. But despite the images of devastation, the cathedral’s main structure has been saved, along with many of its most priceless contents.

Even as firefighters worked to extinguish the last of the flames early Tuesday morning, there was already a massive commitment of resources dedicated to the rebuilding of one of the world’s most recognizable churches.

Before the fire was out, French president Emmanual Macron committed himself and the nation to rebuilding Notre-Dame, and he announced a fundraising effort to ensure its success. In response, by Tuesday afternoon more than 700 million euros had been pledged to the project.

Bernard Arnault, CEO of luxury fashion company LVMH and the third richest man in the world, has pledged 300 million euros in support, with other major figures in business and finance making similar commitments.

President Macron has said that he hopes that work can begin as soon as possible, offering the possibility of some kind of reopening in as soon as five years. While talk of a reopening appeared unthinkable to many just hours ago, Paris firefighters are now confident that the main cathedral structure has been saved, and the stonework remains sound.

While the images of the exterior suggested nearly total devastation, inside the cathedral’s vaulted stone ceiling mostly held, and protected many of the cathedral’s religious and historical treasures from the flames.

Notre-Dame de Paris is home to several irreplaceable relics, most notably the crown of thorns, a piece of the true cross, and one of the nails used in the crucifixion. There are also many relics of French saints.

While a final inventory of what survived the fire may take weeks to compile, much good news has already been announced.

Relics and art were saved

Despite the speed with which the fire appeared to spread across the cathedral, a standing emergency plan was in place to save the most important relics and artwork in case of a disaster, and it appears as though that plan was largely executed effectively.

The majority of the relics were rescued from the fire in what the Paris mayor described as a “formidable human chain.”

Fr. Jean-Marc Fournier, the chaplain of the Paris Fire Department, accompanied firefighters into the cathedral to rescue the crown of thorns and the Blessed Sacrament from the tabernacle.

There were, however, several relics stored in the spire of the cathedral, including one of the thorns from the crown of thorns. These are believed to have been destroyed along with the spire.

As images of the fire spread, many assumed to worst for the cathedral’s three stained glass gothic rose windows. Dating from the 1200s, the windows are some of the most recognizable images not just of Notre-Dame but of Gothic architecture, still containing some glass from their original construction.

Initial reports all but assumed their destruction severe damage in the fire, with many fearing that the lead used to set the windows must melted due to the heat, or that the glass would have been shattered by the water pumped in to try to control the blaze.

Despite these fears, pictures published Tuesday appear to show all three windows are intact. They will be inspected for any damage, but appear to be relatively unscathed.

The organ was untouched

The cathedral’s grand organ, which was built in the fifteenth century, was not touched by the flames. While it is not yet known if it remains in playable condition, it may have been damaged by the firefighting efforts, hopes for restoration were given a significant boost by the news.

The altar and cross are still standing

In what has become one of the more breathtaking images of the cathedral’s destruction, the gold cross behind the main altar remained standing throughout the inferno. The area around the altar appears to be relatively untouched, and some photos even show rows of chairs still neatly stacked.

The bells and bell towers are intact

As emergency responders worked to fight the blaze, firefighters warned that there was an imminent risk that fire could compromise the north belfry of Notre-Dame’s historic front edifice. The overwhelming danger, they warned, was that the main bell could crash through the body of the building, fatally compromising the stonework.

At one point, officials said there was only a 90 minute window to save the towers. These efforts were successful.

The main bell, dubbed “Emmanuelle,” has served as a national punctuation for historic moments. It has rung to mark the coronation of kings and emperors and the end of two world wars.

Despite the outpouring of support and public commitment of political will, there is not yet a timetable or cost estimate for the extensive repairs. However, with the entire cathedral feared to be a loss just hours ago, the amount that was saved is being hailed as victory and progress in itself.

At the Basilica of the National Shrine of the Immaculate Conception in Washington, DC, has set up a fund to help the Cathedral resurrect and rebuild. Information on this fund, and directors for submitting any locally-collected contributions, been sent to diocesan finance directors as well. If parishioners would like to support the effort and your diocese is not taking up a special collection, they can do so easily by visiting www.SupportNotreDame.org which is a site solely dedicated to this cause

Pope to priests: Best place to be is among the people

Try a taste of Easter

Saved from the flames: The treasures that survived the Notre Dame fire 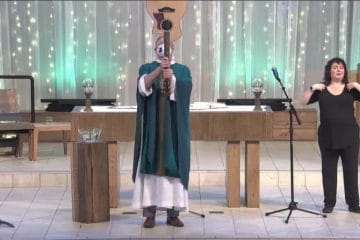