My favorite children’s book is You Are Special by Max Lucado. It’s the story of a creature whose life is defined by what others think of him, which only worsens his low self-esteem. The tragedy of the story lies not in the main character, who eventually learns his worth comes from his Creator, but in the surrounding society, who fail to see the profound value of those they consider to be lowly.

Our value is defined in the creation narrative. In creating man, God voiced His intention, “Let us make man in our image after our likeness.” (Gen. 1:26) God formed Adam from the clay and gave him the breath of God. This divine gift wouldn’t be repeated until Jesus breathed on the disciples in the upper room, giving them the Holy Spirit.

This is our foundation. Every person is made in the image and likeness of God and therefore, possesses inherent dignity and deserves respect. Across Christian communities, October is Respect Life month. Humankind in every location, race, education level, of every age, with or without common abilities, shares at least this one thing in common: We are made by divine design.

In light of this, there are groups of people who may be neglected, avoided or judged; those who need respect and mercy because of their various levels of vulnerability. It’s understandable to be unsettled by others who function and behave differently than we do, but in order to imitate Jesus, we have to open our eyes to what we have in common. Though not an exhaustive list, the elderly, people with disabilities and the incarcerated are among those who, for one reason or another, might give us pause when we’re trying to love as Christ does.

Every year at summer camp, we took a visit a nearby nursing home. The residents received us happily and enjoyed the songs we sang for them. The general idea was to bring a little sunshine to the elderly. Despite the good intentions, however, there were several campers who were unsettled in the experience. Several residents were disabled or deformed from age or illness. For the hesitant campers, interactions came awkwardly if they came at all.

This experience isn’t exclusive to children. When we encounter people different from ourselves, soulful connections can be more difficult. Ease of interaction calls for understanding that humanity goes deeper than a person’s body. My 83-year- old neighbor recently shook his head at his own physical limits, saying he felt like a 30-year-old on the inside. Despite his age, he was the same person as he was 50 years prior. Within each person lies a soul with the imprint of God. 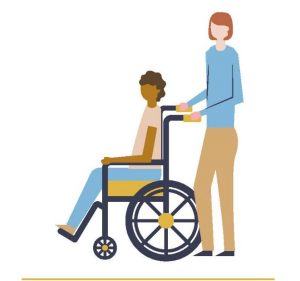 Noelle Collis-DeVito directs the recently-established Office of Persons with Disabilities for the Archdiocese of Cincinnati. “The office exists to spotlight dignity and defend dignity,” she said. “It’s our job as the body of Christ to advocate for [people with disabilities].” That advocacy is multi-faceted, but the work Collis-DeVito is most excited about is providing sensory-friendly Masses across the archdiocese. People affected by Alzheimer’s Disease, autism, Down’s Syndrome and other disabilities can be easily overwhelmed by different environments. Sensory-friendly Masses decrease stimulation. This means softer music and briefer homilies, as well as pictures of the order of Mass in pews so attendants can follow along easily.

This Mass not only provides a more adaptive environment for persons with special needs, but it’s also a place where congregants can serve in the liturgy. “We all have gifts to give one another. Here, congregants contribute to the Mass,” Collis-DeVito said. The ability to contribute gives a sense of worth and pride of self.

Collis-DeVito has a tremendous heart for her work, yet she’s confident that anyone can go beyond themselves to serve. “If something makes you uncomfortable, then go toward it. If we’re uncomfortable, we need to ask ourselves why. What is it that unsettles us?” In identifying the source of our discomfort, we’ll be able to move through it to see the inherent dignity of disabled people.

While this can be challenging, even more so may be recognizing the dignity of people whose lives aren’t riddled with disability, but guilt, as the case might be with those who are incarcerated.

“Everyone needs forgiveness, to forgive someone, or both.” said Mary Arlinghaus, director of the Office of Incarceration Ministries for the archdiocese. Thinking back to his initial days of prison ministry, Arlinghaus was uncertain how to interact with inmates. His experience was simplified when an accompanying priest gave him advice: “Say hi. Shake hands. It’ll be okay.”

Arlinghaus recalled the men entering the facility chapel. “They were just guys coming to Mass. I didn’t know what they did, yet there I was, standing with them, worshiping the Lord.”

The experience of being in the presence of Christ was not just grounding, but eye-opening for him. “I was kneeling next to [an inmate] after the Sanctus. It struck me so hard that this is my brother in Christ.”

“There are many voices who want to make their guilt their identity…but what defines them is that they belong to God.” That’s the only thing, Arlinghaus offered, that can break through the bars in their minds.

When asked how we could encounter the humanity of prisoners and avoid judging them by what they’ve done., Arlinghaus said, “It happens slowly with a lot of presence and patience and persistent prayer… It’s continually being that person reminding them that it’s God who makes them whole.”

From this truth, many in prison experience personal victories. “Even if they don’t go through RCIA, they begin to realize they’re more than the sum of their failures and traumas.”

Despite their personal backgrounds, Arlinghaus and his team still see conversions. “It truly is powerful to see the transformation when they receive the grace of the sacraments,” he said. “Prison ministry rests on, fundamentally, the respect for life from its most vulnerable stage. It doesn’t stand unless it has that position,” he added.

From conception onward, every human life is made in the image and likeness of our Creator. We’re made for imitation of Christ, which means that it is paramount that we mirror His respect. Jesus ate and stayed with people whom others judged. He reached out to the sick and acknowledged the worth of the disabled. When others condemned, the Lord extended mercy. This month, we recall our common foundation of divinely-appointed dignity and ask the Lord to allow us to see others as He sees them.

Pope Weighs in on Civil Unions for Gays

NCBC: Church teaching calls for respect of both common good and conscience