August 6, 2022 The Catholic Telegraph
Home»Features»Seton, Elder Honor Their Own with Hall of Fame
Features

Maribeth Samoya and Dave and Carol Allen are legends in the performing arts circles at Elder and Seton.

The trio was inducted on Feb. 8 into the Seton and Elder Performing Arts Series Hall of Fame, and were honored and humbled by the selection.

Maribeth Samoya
For Samoya, it was a “great honor” because of the list of hall of fame members from Seton and Elder that have gone on to perform and design sets on Broadway, and record nationally.

“It was an honor to be put in the same category as them, that they feel like Dave and I had some type of positive influence in their lives.”

Samoya has taught music at Seton for the past 35 years, and will retire at the end of this year.

Dave & Carol Allen
Dave Allen has taught music at Elder, as well as extracurriculars like show choir, musicals and other performing arts productions for 50 years, and Carol Allen has been there every step of the
way.

“She’s not the type to take the stage,” said Dave. “But she’s been part of the series production for 50 years. As long as I’ve been here, she’s been backstage doing everything.”

She also doesn’t seek the limelight or recognition because she does it for the students, Dave said.

Dave got his start 50 years ago at Elder because they needed someone to fill in when the choral director became ill. He was the music director at St. Williams when they called.

“They said, ‘Would you come over to help out until we find somebody?’” He continued, “Well, they’re still looking 50 years later.”

It was Dave who got the Seton and Elder Performing Arts Series started with some of the sisters at Seton.

“They did productions here (at Seton), and the guys from Elder came over,” he said. “It was a natural blend of the two.”

Changing Career Goals
Samoya and Allen have worked together as colleagues for 35 years, and he taught her as a student.

But their original goals weren’t in education. Dave said he “sort of stumbled into it.” The Youngstown native came to Cincinnati to study at the University of Cincinnati’s College Conservatory of Music. He wanted to be a concert pianist.

“I was sent here by my teacher to study with one of the teachers at the Conservatory of Music at that time,” he said.

Then, Dave said, he became interested in church music and became the organist at St. William, which he continues today. He’s also the conductor at Cincinnati Metropolitan Orchestra, a 60-member community orchestra.

Samoya always knew she wanted to do something with music, but had eyes on being a Broadway or rock star. But her teacher, Sister Marie Therese Thorman, “Really planted the seed in my head to be a teacher instead.”

“It meant a lot to me from my teacher who taught the subject,” Samoya said.

Looking to the Future
Retirement, for Samoya, is a chance for her to “slow down,” so she and her husband, Larry Kutzleb, can spend time with their grandchildren and her out-of-town siblings. But, she said, she’ll still be “very involved” with helping out Seton’s music department.

Dave and Carol Allen and Samoya have dedicated their lives to future generations of students because, as Dave said, “This is really what it’s all about. What I tell the kids, we’re their teachers. They’re the real stars of the show, not us. What they become, what they do, is really the important thing. We’re here to bring them out.”

In Profile: Dina Beach, Assistant Director of Latino Catechesis Attributes Miracle and Faith to Her Survival 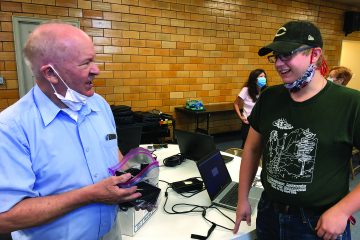