One of the three abortion providers in the Archdiocese of Cincinnati has been ordered to shutdown. 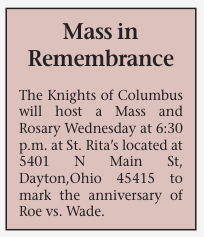 The Ohio Department of Health (ODH) has denied a variance to the Women’s Med Center abortion facility in Sharonville, Ohio. The ruling requires the facility, run by abortionist Dr. Martin Haskell, to cease operations by Feb. 4. Haskell is known for helping to publicize partial-birth abortion, having described the procedure step-by-step in a widely-cited 1992 paper.

The Sharonville Women’s Med Center, known as the Lebanon Road Surgical Center in ODH documents, had its license revoked for failing to have a transfer agreement with a local hospital as stipulated by Ohio law. The clinic then applied for a variance, and continued to operate during that time.

“There is a history of problems with Lebanon Road Surgery Center and its operator,” said Tessie Pollock, a spokesman for the ODH, “and after a lengthy review and hearing process the agency no longer has confidence in the operators’ ability or commitment to following Ohio’s regulations for ambulatory surgical facilities.”

Theodore M. Wymyslo, director of the Ohio Department of Health, wrote in his denial that past failures of the clinic to provide timely communication “worried me that conditions at the facility while operating under the variance could not be adequately monitored to ensure patient safety.”

The Archdiocese of Cincinnati’s Family and Respect Life Office has worked with the various organizations to help publicize their activity.

“Prayers and diligent work have been answered,” said Colleen Gerke, director of the archdiocese Family and Resect Life office.  “It is definitely good news for the work that’s been done in the pro-life ministries. It is good news for Sharonville.”

Right to Life of Greater Cincinnati broke the news of the clinic’s pending closure with a press release Tuesday morning. The clinic is not entirely out of legal options however, and its representatives may file an appeal. The appeal must be filed by Feb. 1, 15 days after the clinic was informed of the ODH ruling. If a judge grants the facility a stay, it could remain open during the appeal process.

“It is past time this abortion business was denied operations, for the health and well-being of this community and beyond, but even more for the little lives saved and for women’s safety,” said Paula Westwood, executive director for Right to Life of Greater Cincinnati. “Cincinnati Right to Life has been working for years to this end. Even if Haskell should appeal to the courts, his days of operation in this area are numbered.”

A message left for the Sharonville clinic’s spokesmen had not been returned Tuesday afternoon.

Groups from Archdiocese of Cincinnati reach March for Life

Live! the 50th annual March for Life in Washington DC