Singing does good for the soul, pope tells young choristers

VATICAN CITY (CNS) — Singing is good for one’s soul and, as St. Augustine says, Christian life is not a sad path but a joyous one that is done “singing and walking,” Pope Francis said.

“Remember this: Sing and walk,” the pope said Dec. 31 to 6,000 young choristers, their families, friends and choirmasters from 18 countries. “And in this way, your soul will enjoy more the joy of the gospel.”

The young choir members took part in the Dec. 28-Jan. 1 International Congress of Pueri Cantores in Rome. They held concerts at several churches in Rome and were scheduled to sing in St. Peter’s Basilica on New Year’s Day.

The pope took questions from several young choir members, choosing to address the youth off-the-cuff. A young girl asked the pope what he thought about their music and if he liked to sing.

“I would much rather like to hear you all sing today,” the pope said. “But if I sang, I would sound like a donkey because I do not know how to sing. I don’t even know how to speak well.”

Recalling his childhood, the pope said his mother would sit him and his siblings in front of the radio to listen to operas and explain the meaning of what was sung, so they learned to appreciate music.

Singing, he continued, educates the soul and does well for the soul. “St. Augustine says a beautiful phrase, and everyone should learn it. Speaking on Christian life, on the joy of Christian life, he says: ‘Sing and walk.’ Christian life is a path, but it is not a sad path, it is a joyous path, and this is why one must sing.”

The next question, asked by another young girl, took a more personal turn. “How are you so good? Do you ever get angry?” she asked. She also asked the pope if he had any resolutions for the coming new year.

The pope remembered Jesus’ response to the young rich man who addressed him as “good master,” saying that “only God is good.”

“We all have the wound of original sin that brings us to not be good all the time, but always remember, only God is good. And if you want to find goodness, go to God. There you will find all goodness, all love, all mercy,” he said.

He laughingly admitted, however, that while he does get angry, “I do not bite.” The pope also said that although he gets mad when someone “does something that isn’t good,” he calms down by reflecting on the times he has angered others.

“Anger is poisonous, it poisons the soul,” he warned. “To become angry doesn’t only hurt others, it hurts you. There are people who have a bitter soul, always bitter and living angry. It’s almost as if they wake up every morning and brush their teeth with vinegar. It is a sickness.”

Regarding his New Year resolutions, the pope said that after some time of reflection during a personal spiritual retreat, he resolved “to pray more,” adding that, like all bishops, his “first job is to pray.”

The final questions asked to the pope came from a young chorister who wondered what the pope dreamed of becoming when he grew up. She also asked if, with so much bad news seen on television, the world would continue to be so broken when she is older.

“The way the butchers would cut meat with their knives was like an art form, and I loved seeing that,” he said. “Obviously, I changed my mind, but when I was little, I would’ve like to become a butcher.”

Taking a more serious tone, the pope answered the young girl’s second question, saying that although there are many bad things happening in the world, there are also good things that often are not covered by the media.

Pope Francis reminded the young choir members that there is “a war against the truth of God, the truth life and joy” and, as the Bible says, “this battle between the devil and God will continue until the end of time.” However, he also said that despite so many negative reports, there are still many who through their lives, manifest the beauty of God.

Singing does good for the soul, pope tells young choristers

Partial Solar Eclipse Day in the Archdiocese of Cincinnati 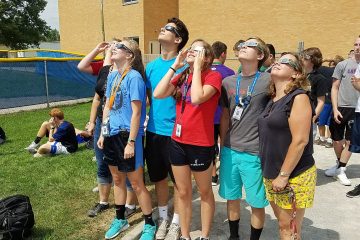