Sisters of Charity of Cincinnati Andrea Koverman and Tracy Kemme pronounced first vows during a ceremony June 27 in the Immaculate Conception Chapel at the Mount St. Joseph motherhouse. Both women professed the vows of poverty, consecrated celibacy and obedience, committing themselves “for three years to the service of God, God’s people and all of creation, as a member of the congregation of the Sisters of Charity of Cincinnati.”

“I devote my life to continuing the transformative mission of Jesus to bring about the Kingdom,” they both vowed. “I freely promise to live in community and be a woman of communion, energized by Christ’s love and life.”

Sister Joan Elizabeth Cook, president of the Sisters of Charity, accepted the women’s vows and following the Mass and ceremony in the chapel guests were invited to celebrate with the community in the motherhouse Dining Room.

Sister Andrea grew up in Centerville. Her childhood parish is St. Francis of Assisi. She graduated from Archbishop Alter High School in Kettering, and majored in special education at Miami University. Following graduation, Sister Andrea moved to Beaufort, SC, to begin 20-plus years teaching in the coastal island communities. She holds two master’s degrees, one in curriculum and another in administration. She comes from a long line of Sisters of Charity: great-aunts Mary Walburga and Mary Naomi; aunt Mary Joseph; and cousin Kateri Maureen – all Kovermans.

Sister Andrea is currently ministering at the Intercommunity Justice and Peace Center (IJPC) in Cincinnati, whose mission is to educate and advocate for peace, to challenge unjust local, national and global systems and to promote the creation of a non-violent society.

“This past year has really clarified my call,” said Sister Andrea, “that I am absolutely certain it’s right, which is a really good feeling.”

Sister Tracy grew up in Fairfield and graduated from Roger Bacon High School. Her childhood parish is St. John Neumann. She earned her bachelor’s degree in psychology and Spanish from the University of Dayton. She served two years with the Rostro de Cristo volunteer program in Ecuador and one year as an Associate in Volunteer Ministry with the Sisters of Charity of Cincinnati.

Sister Tracy’s journey with the Sisters of Charity, combined with her service in Latin America and at the border, has led to her current role as an intern with the Archdiocese of Cincinnati’s Catholic Social Action Office. She serves as a member of the archdiocesan Immigration Task Force, which has recently been in negotiations with the county Sheriff’s office to advocate for just treatment of immigrants.

“I am humbled and proud when I think about the women who have made these vows through the years,” Sister Tracy wrote in her blog ‘Diary of a Sister in Training.’ “What courage, what commitment, what love they have brought to the world! These vows are indeed the way I want to give my heart and my life.”

Both Sisters Tracy and Andrea will live in SC community and remain in their current ministries. During the next three years they will continue to discern their call to lifetime commitment as a Sister of Charity.

Families must forgive and not 'end the day in war,' pope says 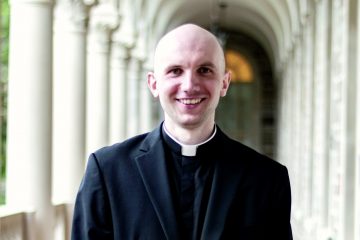