ST. LAWRENCE DEANERY — The Feb. 26 centennial Mass and celebration at St. Martin of Tours Parish in Cheviot took on added significance, falling on the 100th anniversary of parish’s first Mass.

Pews in the church were filled and people lined the wall for the Saturday evening Mass. Father Terence Hamilton, who grew up in the parish and now serves as pastor, celebrated the Mass with nearly a dozen concelebrants. Sisters of Notre Dame, who for years taught and administered in the parish school, returned for the celebration.

“It was magnificent,” said Sue Momberg, co-chair of the parish’s centennial committee. “The Mass was very prayerful and beautiful.”
Nearly 500 people attended a dinner and dance at a nearby reception hall after the Mass. The day was proclaimed St. Martin Day in Cheviot, and a selection of materials from the parish were displayed in the public library.

In his homily, Father Hamilton spoke of the 13 core founders of the parish and how their spirit remains in the faith community today. He reminded parishioners of their own responsibility to provide the foundation for the parish’s next 100 years.

“Our gathering…is a direct link to those first parishioners who planted the seeds,” Father Hamilton, who has been pastor since 2006, said in an interview.

In the early 20th century Catholics from Cheviot attended neighboring St. Catharine of Siena and St. Aloysius Gonzaga parishes, which were a mile or more away. By the summer of 1909 the Cheviot residents had grown tired of the long walk to Mass each Sunday, particularly during rainy or cold weather. After one rainstorm turned the road into mud, they began discussing the need for their own parish.

More than two dozen people attended the first organizational meeting and more than 100 came to a second. A committee was formed to take the request for a new parish to then-Archbishop Henry K. Moeller.

While there was some concern that a new parish would hurt attendance at the established faith communities, the committee persevered and, in late 1910, the archbishop agreed Cheviot needed a parish. Even before permission was granted, some of the founders had pooled their resources to purchase land for the new parish.

“That’s a part of the persistence and dedication of the people who had that vision,” said parishioner Liz Kissel, who has been researching the parish’s history. “Taking the time to really learn about the history. I just marvel at the faith of those who started the parish.”

Father Otto Auer was named the first pastor in January 1911, and a small wooden church was quickly constructed. The parish was formed with 125 families, and the first Mass was celebrated on Feb. 26.

The centennial celebration kicked off last Nov. 11, St. Martin’s feast day. The launch included a vesper service, a procession in the neighborhood and parishioner Tom Nader on horseback portraying St. Martin. The story of how St. Martin, a soldier, wrapped his cloak around a beggar, was reenacted.

Several events are being planned to celebrate the centennial year, which will close Nov. 11. The committee will have a presence at the parish picnic in May and a centennial booth at the summer festival featuring memorabilia, posters and displays. A special choral music festival for the centennial year is being planned for the fall and the parish is working on church tours for the public. A new parish directory is being published. A special Christmas card featuring the church alter was also produced. Former teachers and administrators from the school were invited back for a special all-school Mass during Catholic Schools Week.

“One of the things I really enjoy about it is it’s a very unpretentious parish, said Kissel, a lifelong parishioner. “People are welcoming. It’s a warm place.”

“It’s important to me because it’s my parish,” he said. “It’s a closeness like you would have for your family.”

Barb Krollman was a parishioner in her youth. She later left the parish, but returned about five years ago. Her great-grandfather, Jacob Krollman, was one of the original committee members who founded the parish. She said parishioners today carry on the determination and community spirit of the founders.

“It’s a very united group of people, and I think they are very dedicated,” Krollman said. “It’s a very tight-knit community but it’s also light-hearted.”

“I grew up here and I never dreamed I would come back as pastor. For me, it’s kind of a wonderful privilege to pastor at a time when we’re celebrating this centennial,” Father Hamilton said. “There’s a good sense of community and I think the centennial has enhanced that.”

Catholic Moment: What's on your mind? 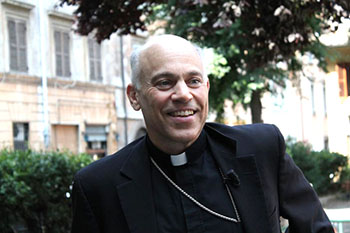