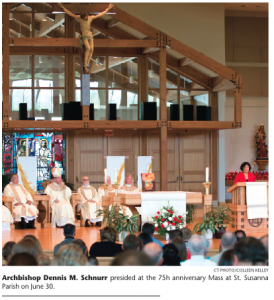 It was on April 17, Easter Sunday, 1938, that members of a newly formed parish in the city of Masson gathered to celebrate Mass for the first time. They initially worshipped in a small white chapel built at a cost of $15,000. Msgr. Joseph Schneider, then rector of the Mount St. Mary’s Seminary, was named administrator of the new parish. St. Susanna was chosen as its patroness as of way of honoring Susanna Hinkle, a convert to Catholicism and benefactor to many Cincinnati area religious institutions. Because of her generous financial support, the dream of Catholics in Mason to have their own parish became a reality.

The faith community experienced steady growth over the years, increasing to 94 families by its 10th anniversary in 1948. Groups such as the Holy Name Society, Catholic Rural Youth Organization and Ladies Rosary-Altar Society were all meeting regularly. The parish school opened in September of 1948 with 35 students in four grades, who were taught by the Sisters of Notre Dame de Namur. To accommodate the needs of a congregation of more than 300 families, a new church was constructed and was dedicated on Sept. 13, 1959, by Bishop Paul F. Leibold.

By the time St. Susanna Parish celebrated its 50th anniversary in 1988, it had become a vibrant faith community that was spiritually healthy and socially alive. Adult faith formation classes were, and still are, well attended, and various parish committees, such as Peace and Justice and Bereavement had been formed. The parish school was full, and dedicated teachers and parents were committed to ensuring the children were formed in their Catholic faith.

As the parish looks to the future, it remains true to its tagline and is a  “Community of faith; a church in action,” which currently serves more than 4,000 households. Future opportunities to mark St. Susanna’s anniversary include a Taste of St. Susanna. This family event is scheduled for Oct.19, from 6-10 p.m., and will feature a sampling of vendors and entertainment representing the variety of cultures that comprise the parish.

40 Days for Life underway in archdiocese

With loss of NCR, Dayton loses ‘part of its identity’