A statue of the Sacred Heart of Jesus in front of Catholic church in Asheville, North Carolina was vandalized and restored this past weekend.

“Sadly, when we arrived for Mass on Sunday morning, we discovered that someone had defaced our widely revered statue of the Sacred Heart of Jesus,” said Father Roger Arnsparger, pastor of the Basilica of St. Lawrence in Asheville, in a statement.

The statue, which stands in front of the basilica, “has greeted westbound motorists on I-240 in Asheville for decades,” he said. The seven-foot statue was splashed with red paint from the neck down to the base.

“The statue features Jesus with arms outstretched and the image of a heart upon His chest, representing Christ’s love for all of humanity,” Arnsparger wrote.

The property manager had the statue cleaned within hours of discovering the vandalism on Sunday, July 4. The statue was fully restored before the noon mass on Sunday. Fr. Arnsparger asked parishioners on Sunday to pray for peace and respect for everyone regarding the incident.

The incident was reported to police but there is no suspect at this time.

Arnsparger wrote that he is praying for the perpetrator. “We are endlessly grateful for the support of our community,” he concluded.

The attack on the Asheville parish follows a string of church vandalisms this year.

On May 28, a Blessed Mother statue was found split in half in the parish courtyard of St. Adalbert Parish in Queens, New York.

On the weekend of May 15, a statue depicting the Blessed Mother holding the infant Jesus was discovered vandalized outside the diocesan administrative offices, with the statue of Jesus decapitated. On Friday May 14, a crucifix display outside St. Athanasius parish in Brooklyn was found toppled over, with an American flag outside the rectory burned.

Catholic Churches and statues throughout the United States were targeted for arson or vandalism throughout 2020 as well. 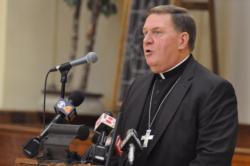