BROWNSVILLE, Texas (CNS) — It was the stories of how his teachers, Mexican-born religious brothers, had suffered persecution that steered Marist Brother Paul Phillipp of south Texas, now 92, to his religious vocation.

Reared on a farm some 25 miles west of Brownsville, young Paul’s parents valued a Catholic education. So to get him and his siblings to the all-boy and all-girl schools just north of the U.S.-Mexico border, they bought a brand new 1937 Ford sedan.

It was there at “St. Joe” that the then-sophomore met English teacher Brother Paul Aleman of Mexico. Brother Paul said Brother Aleman crossed the Rio Grande in 1906 with other Mexican religious teachers and brought stories of Catholic persecution and blood-drenched altars.

“This inspired me,” he recalled in an interview with Catholic News Service at the school, now called St. Joseph Academy and coeducational since 1971. “The persecutions and all these brothers had left their homes (for safety) and came here to Brownsville to learn English.”

Two years later in 1939, during his senior year, Paul accepted the teachers’ invitation to walk in their footsteps.

Brother Paul said that although his parents believed in advancing his post-secondary Catholic education, they didn’t want him studying overseas. By taking courses in Mexico he might be subjected to religious harassment. And in Spain, where many Mexican religious studied, he could die in their waning civil war.

With their prayers answered, the farm boy from La Feria never had to hit the books outside the United States. Instead the Marist brothers in what was the order’s Mexican province made arrangements for the future religious brother to study about three hours north of New York City in Poughkeepsie.

After spending two years securing a teaching certificate along the Hudson River, the Marist order assigned the young Texan to a school in Laredo.

In 1946, he was reassigned to St. Joe to switch with another teacher who was sick and needed to relocate to a dryer climate. It was during this time the young Marist brother said he learned the art of maintaining school buildings and football fields.

And just as the gridiron turf took root in 1962, Brother Paul was shipped to Pace, Florida, for four years to attend to Cuban exiles who fled their homeland during the Cuban Missile Crisis and to help organize a new school there.

From there, he went to Augusta, Georgia, for 18 years and refined his green-jacket golf swing, and evolving teacher, vice principal and principal roles.

In 1984, the Marist journeyman returned to St. Joe and the Lone Star state for good and taught seventh-graders, along with typing, business and physics classes. He even found time to design and polish a then nonexistent baseball diamond.

In 2006, when he was 82, Brother Paul said it was suggested he retire. As a tribute to his long career and commitment to Catholic education, he was awarded a six-month applied-theology sabbatical at the University of California at Berkeley.

Even then, he wasn’t done.

Upon returning from the gold-rush state, he said St. Joe offered him the maintenance director position, which he held until 2011.

To get a sense of just how long Brother Paul has been influencing young Catholic minds, just take a look at gasoline prices during the times of his many moves:

“It was a quieter type of life,” he said reflecting on decades past. “I think there was more home life (for students) back at that time.”

And hobbies such as building crystal radios from a Popular Science magazine may have been less distracting, too.

“With all the (new) electronics and so on,” he said describing students with smartphones, “they’re so engrossed in finger work. They have their thumbs so active. They’re not looking anywhere, and everybody has to have one.”

Now the Marist brother volunteers for cafeteria duty and distributes incoming mail to the various departments. “Helping a little bit around the school, that’s my life now,” he said with a chuckle.

Keeping students, teachers and principals happy has always been his life.

“When something went a little wrong (like) change light bulbs, or when we got into air conditioning, keep those things going, and getting up on the roof fixing air conditioners. … I think that’s what wore out my knees climbing up and down. Now I’m paying part of the price, but that’s good.” 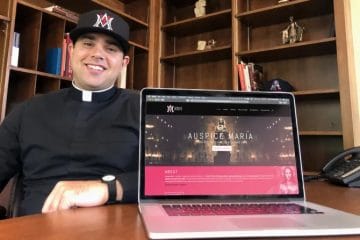