Sister Dorothy, a native of Dayton, was murdered in Brazil in 2005. Her ministry there included defending the land ownership rights of the poor farmers as well as rainforest preservation. The Sister of Notre Dame de Namur was approached by gunmen who stated their intention to kill her. Her response was to pull out a Bible and read the Beatitudes. The gunmen were undeterred, and she died reading the Scriptures.

The Spirit of Sister Dorothy Stang Award was first handed out in 2010. The purposes of the award are: to keep alive the ministry and memory of Sister Dorothy Stang that included her solidarity with the poor, her care for the earth and her love for Jesus’ mission; to encourage schools, parishes and members of the archdiocese to study/teach about Sister Dorothy and encourage others to follow in her footsteps by promoting global solidarity and cross cultural mission and ministry; and to honor teachers, principals, parish ministers and graduating high school seniors who exemplify the values of Sister Dorothy through their social justice ministry, service work, and teaching.

Among this year’s winners, Su Casa Hispanic Center, a ministry of Catholic Charities, is the first organization to be given the award, which is generally given to individuals. The award is presented by the Sisters of Notre Dame de Namur and the archdiocesan Offices of Mission, Catholic Social Action, Evangelization and Catechesis, and Youth and Young Adult Ministry.

Sister of Notre Dame de Namur Joan Krimm, who knew Sister Dorothy, addressed the Su Casa staff June 5 when the organization was presented with the award.

“You’re about educating, doing GED, you’re about getting rights for the people who come here,” Sister Joan said. “You’re doing the same work that Sister Dorothy was doing, and you should be proud of that.”

“This signifies that Su Casa Hispanic Center advocates and fights for the human rights of the Hispanic Immigrant community here,” she said. “To fight for human rights, there is nothing more important than that.”

The individual award winners are:

Molly Bardine, Chaminade Julienne HS
Bardine has been on the faculty of Chaminade Julienne High School for 18 years. She is the co-chair of the MIT (Mission Integration Team) and the creator of the annual Stang Symposium which has addressed such topics as human trafficking and care of the environment.

Patrice Harty, Bishop Fenwick HS
Harty, a 42-year member of the Bishop Fenwick High School community, recently planned and carried out a community wide Kids Against Hunger cross-cultural day of service. An associate with the Sisters of Charity, Harty visits sites in Guatemala annually to better understand and advocate for the situation of the marginalized and those who live in poverty.

Colleen Kammer, Incarnation
Kammer works with the Marianist Environmental Center on environmental education. She is also involved in tree planting efforts with the Five Rivers Metro Parks. This is the third year Colleen has planned and led a Sister Dorothy Stang Tree Planting Day, which involved prayer and education as well as the planting of many native tree species.

Sue Sack, Northwest Dayton Pastoral Region
Sack is the motivation behind God’s Garden, a cooperative effort of St. Paul Parish’s members to help the food pantry provide nutritious fresh produce to their clients. In doing so, she also helps educate the garden volunteers, students and others to reconnect with the earth through organic gardening. Sack was also a part of Creation Connections as well as the Marianist Environmental Education Center.

Nell and Steve Wulff, St. Monica-St. George
The Wulffs are passionate about work on behalf of the environment. They have educated their parishioners with many programs to help them realize their impact on the environment and to challenge them to reduce their carbon footprint. 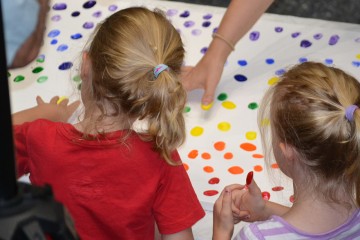