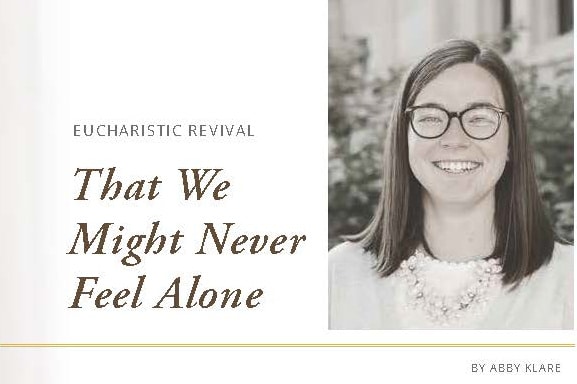 Growing up as the oldest of three girls, I was the rule-follower in the family. I was especially respectful and obedient to my mom and her directives. From “clear your plates and empty the dishwasher” to “hurry up and get ready for Mass,” I generally lived with a simple trust that she had my best interests in mind, so I did as she said, as best I could.

In Feb. 2021, my mom passed away after a brief, fierce battle with cancer. The absence of her earthly presence radically changed my life, and for quite some time, I felt directionless without the person who had always been my guiding light. In the weeks and months that followed her passing, everything about me could be characterized as follows: inconsistent, overwhelmed and unstable.

In response to this new reality, when my world was turned entirely upside down, our Lord, in His mercy and infinite goodness, drew me to Himself through something uniquely constant, consoling and stabilizing: the Eucharist. This gift, the physical reality of His love, poured out for us on the Cross and made present through the daily sacrifice of the Mass, became the center and anchor of my life.

Throughout those first weeks without my mom, the absolute most I could manage was to simply show up, so that’s what I did. I began regularly attending daily Mass and in the depths of my own poverty, Jesus Christ encountered me in an intimate, personal way. Not by my own doing, but through the powerful graces He bestowed on my life through the daily reception of His Body, Blood, soul and divinity, I knew I was held safely in His tender embrace.

It was during these vulnerable, early months without my earthly mother that I was led to encounter the reality of my heavenly mother, our mother, the Blessed Virgin Mary. I didn’t pursue a relationship with her; in fact, I was quite skeptical and, at times, indignant at the suggestion that she could satisfy a portion of the maternal void I now knew so painfully. However, one morning while sitting before our Eucharistic Lord in adoration, I found myself reflecting on a passage from St. John’s gospel, the wedding feast at Cana.

Following the exchange between Jesus and Mary about the empty wine jars, Mary speaks to the servants surrounding Jesus and says: “Do whatever He tells you” (Jn. 2:5). Meditating on this verse, I understood for the first time that Mary really is a mother with authority, to whom is owed reverent obedience.

Immediately, Mary’s maternal wisdom and direction brought to mind my relationship with my own mom. Like my earthly mother, our heavenly mother only holds the best interests of her children in her heart. To do as she asks is more than just or obedient, it’s one of the most powerful ways we can be transformed into saints. So, what does Mary ask? Like many good mothers, she is candid and direct: do whatever Jesus tells us.

At the highpoint of His earthly life, Jesus imparted upon the Apostles, and in turn all of us, a very clear directive: “And he took bread, and when he had given thanks he broke it and gave it to them, saying, ‘This is my body which is given for you. Do this in remembrance of me’” (Lk. 22:19). By giving us the Eucharist, Jesus Christ offered His entire self to us, that we might never feel abandoned or alone. He was, is, and always will be God with us.

Similarly, hanging from the Cross, He gives us the gift of His blessed mother. These great gifts are inherently united as overflowing sources of grace in our lives. Each and every day, we are invited to heed the direction of our heavenly mother and live in communion with her Son, our Savior, through His gift of the most Holy Eucharist.

As has always been the case in this life, we have the choice in how we respond to our mom’s instruction; may we respond with a Fiat like Mary, living a Eucharistic life that brings glory to our God and world. 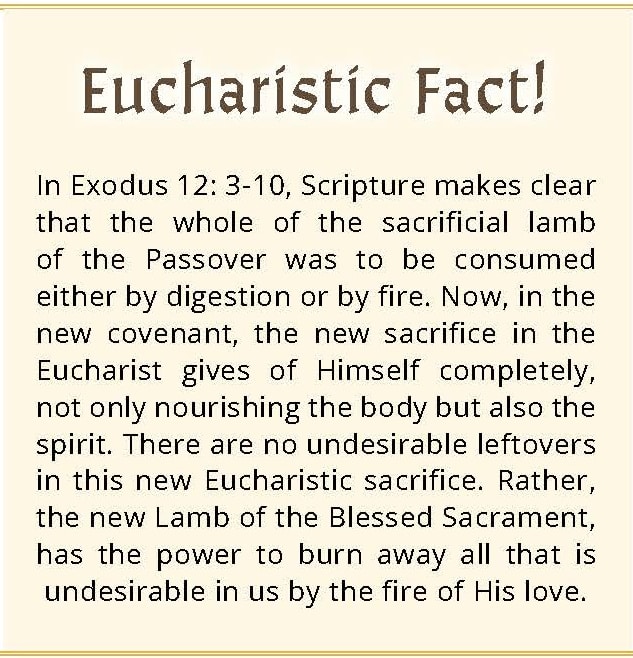