The middle week of September saw diocesan directors of vocations from across the country gathering in the fair city of Milwaukee for our annual convention. As we tend to be on the younger side of the clergy and dominated by extroverts, this tends to be a rather fun conference. Laughs were shared as friendships fostered in seminary and over previous conferences renewed and the frustrations of a challenging ministry were commiserated.

Amid the frivolity, there was work to be done. Perhaps the most significant piece to come out of this year’s convention is a guide for priests to help call forth men to the priesthood. “Lend Your Own Voice to Christ” is a response to the annual survey of men being ordained to the priesthood. Consistently, 80 to 88 percent of newly ordained priests report that they first considered the priesthood upon the recommendation of a priest. However, only 30 percent of priests actually make the invitation! This short booklet grew out of the question of how to encourage more priests to make this invitation to share in their life.

The invitation to consider the priesthood is not rocket science but does have some sure and certain connections with the faith. Most basic of these is that Jesus first calls a man to the priesthood through the pastor of his soul.  The priesthood is the living icon of Christ, His enduring presence to the world. He uses those whom He has already chosen to select the next generation to lay down their life in service at the altar. It remains a clear fact that the witness of a joy-filled priest is the best recruitment tool for the priesthood, just as happy and fulfilled marriages beget the same in the next generation.

It is the pastor of the soul who knows him best, who can truly elicit the calling that has been given by God, whether to priesthood, consecrated life or married life. He has the responsibility to pray for that young person, that he or she might fully develop the gifts that God has given. As director of the Vocation Office, I can assist him in this mission, but cannot usurp it for my own.

There is an idea among some that a big personality, a man’s man, a natural-born leader, is needed to attract vocations to the priesthood. I disagree. What is needed most is a priest with a fatherly heart, a heart disposed towards prayer and discernment. What is needed most is a priest concerned with his own holiness, that he might attract others to desire that same holiness. And he must pray for his people! Through his prayer, God will indicate that person whom He is calling to something different.

The next step is where so many of us, and I include myself in this, might make missteps. We see that young man who exhibits such great joy at serving the Mass and the young woman who spends hours in the adoration chapel. We feel called to say something to encourage a vocation, but what?

It is so easy to pass this off with a joke: “Hey, you’d look good in black!” instead of treating this moment as it truly is — sacred. The calling forth of a candidate to the priesthood or consecrated life is a moment when God truly can work through you, calling this soul to a great, life-long adventure. Don’t destroy it by frivolity!

Rather, a simple affirmation and a challenge plants a seed much deeper in a heart. “Tim, I have noticed how you serve Mass, the reverence you have at the altar and in receiving the Eucharist. I have noticed how you share the faith with your peers in a joyous way. These are traits that could be well served in the priesthood. I want you to pray it over, because I see in you someone whom God might be calling to the priesthood. If you want to talk more about it, just let me know.”

The seed has been planted. God will water it if He sees fit.

A Catholic Response to Homophobic Slur

Pope Francis prays for victims of shootings in U.S. 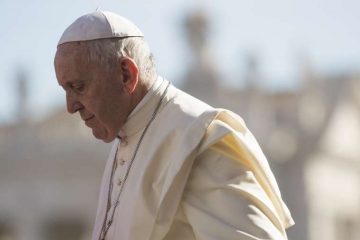