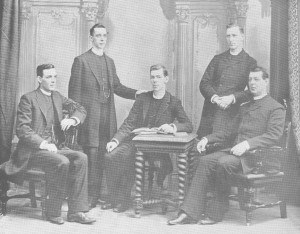 There are several instances of biological brothers becoming priests for the Archdiocese of Cincinnati, but in the late 19th century, an extraordinary instance came from the family of Patrick and Johanna Hickey. Five of their sons became priests for the Archdiocese and one daughter became a Sister of Notre Dame and took the name Sister Annunciata. The second daughter Martha lived with their mother. The sons are pictured above circa 1896. Left to Right, Rev. Edward P. Hickey (1859-1921), Rev. George F. Hickey (1868-1941), Rev. John F. Hickey (1861-1938), Rev. Charles A. Hickey (1863-1953), Rev. William D. Hickey (1857-1924).

Laboring on the Mission is a blog of the Archdiocese of Cincinnati Archives. The title is taken from a letter written by Bishop Edward Fenwick, OP, describing his mission work in Ohio. Whether in the wilds of the 19th century or the baby boom of the 1950s, the Catholic Church continues the mission entrusted to her by Jesus Christ. Here we tell that story.

U.N. Refugee Olympic team: 'The victory scream of all refugees'