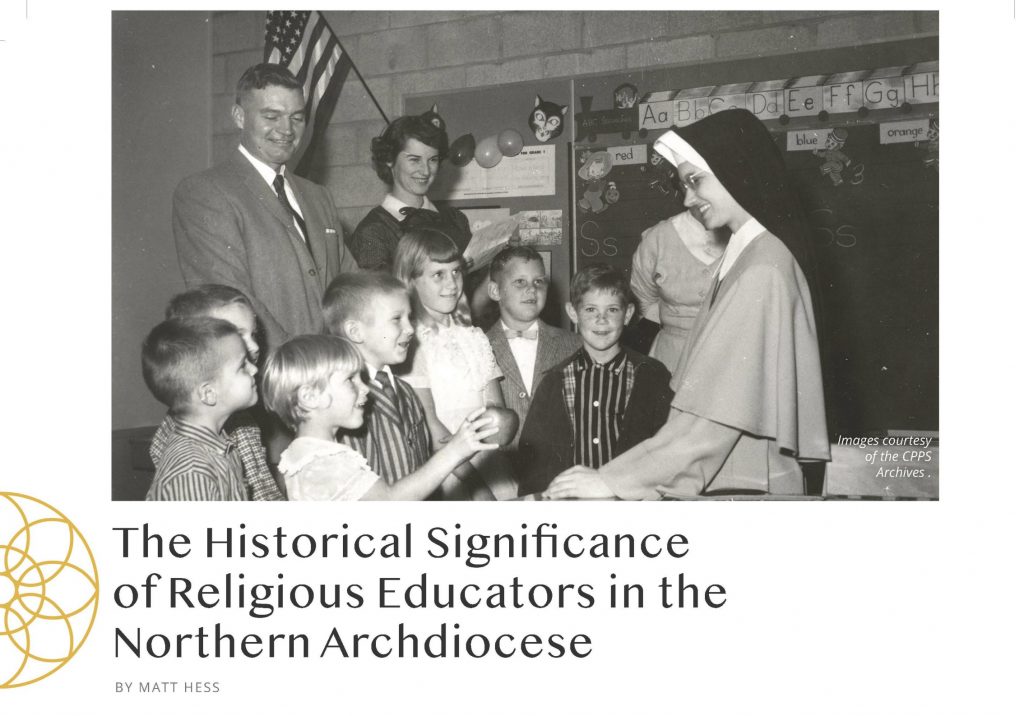 Catholic education in the northern archdiocese is a legacy inherited from the Sisters of the Precious Blood who began in a parish church in the winter of 1844. These dedicated sisters forged a relationship with the community that endured for more than a century as they maintained a presence in many public schools in Mercer, Auglaize, Darke and Shelby Counties.

The Sisters of the Precious Blood wanted to be a life-giving presence to all of their students, Catholic or otherwise, so early on, they focused on formalizing their training. This made them skilled enough to meet state standards for public schools, which, in the past, were more stringent than parochial schools. In 1852, near Cassella, OH, the sisters founded one of the schools to train teachers. This later moved to the motherhouse at Maria Stein. As the sisters’ community grew and state standards became more demanding, they opened a new motherhouse on the north side of Dayton in 1923. This gave them closer proximity to the University of Dayton, where they received their education degrees.

Those visiting the “Land of the Cross Tipped Churches” often ask why there are few Catholic Schools accompanying them. This is due to the large number of community schools, comprised of mostly Catholic students, that had sisters ministering in them from their early years, such as Minster and Maria Stein. Other communities formed mergers between Catholic and public schools in the mid-20th Century after their Catholic populations grew. Places like Coldwater, Fort Recovery and Russia opted to pool resources in this way and keep the established sisters in their classrooms.

How did religious education work within the framework of the public school day? The schools used “release time” for the sisters to teach catechism, or for students to attend Mass. In most cases, this took place before the start of the formal school day. It was common also to find religious articles in the classrooms. Crucifixes and statues of Mary were often visible, especially if the building was a former Catholic School that the public school rented after consolidation.

Bibles were in the classrooms, and students who finished their assigned work could read them. Also during this time, students at schools within close proximity to the church, were permitted to walk over and visit the Blessed Sacrament during their lunch hour.

The number of sisters teaching in public schools began to decline in the 1960s, with the last sister leaving public education in the late 1990s. The situation came to a head in 1963 with a Fort Recovery court case, as the practice was not without controversy in some communities with people of mixed faiths.

There were three Catholic elementary schools that combined with the public school corporation in the 1950s. The plaintiff asserted that Catholic students were bused to these schools, while Protestants went to another. He also said that because release time was midday, there was little to no distinction between time for religious study and the formal school day. The 1965 ruling was that students were to be bused to the elementary building they lived closest to and the district would no longer use release time, but the Precious Blood Sisters could remain ministering to students by their presence in the classroom.

As the decades passed, the sisters began to discern where God was calling them. Many found new ministries where the need was greater. The lay people in the area had become qualified to teach and even lead catechism classes. Thus, religious education programs were taken over by parish members and the need for sisters to fill this role diminished.

The rural, predominantly Catholic communities that remain in this area still encourage the integration of faith into the formation of their students. This is often visible through athletic teams praying together before competitions or students attending weekday morning Mass together before school, as well as in the numerous and active Catholic youth groups that strengthen their faith outside of school and catechism hours. It is a dedicated communal approach that continues the traditions and legacy of the sisters who served them.

This article appeared in the January 2021 edition of The Catholic Telegraph. For your complimentary subscription, click here.

Are changes coming to the Vatican Dicastery for Communications?