Borrowing a phrase from presidential politics, when asked “Why do I stay in the church?” my reply is, “It’s the imagination, stupid.” Since my birth, in ways both conscious and unconscious, the church has provided me with numerous images, metaphors, and stories. Priest, sociologist and writer Father Andrew Greeley makes this clear in his book, The Catholic Imagination, when he writes that “Catholics live in an enchanted world, a world of statues and holy water, stained glass and votive candles, saints and religious medals, rosary beads and holy pictures.” All of these have given me a Catholic “vocabulary” of faith that has helped me navigate the turbulent waters which make up the river of life.

To offer a recent example as evidence, I refer to the movie “Gran Torino”, starring Clint Eastwood. I will not spoil it for you when I say that you can see Eastwood’s character, Walt Kowalski, one of two ways: either as a racist, angry, disgruntled Korean War veteran, best captured in his line, “Get off my yard,” or as a Christ figure. Blame it on my Catholic imagination, but I see him as a Christ figure.

A while back I was asked to serve on jury duty. Just my luck, I was chosen as the alternate. This meant that I had to sit through all of the proceedings but, unless one of the other jurors couldn’t fulfill their obligation, I would be dismissed when they went into deliberation.  This is exactly how it played out.

I later expressed my frustration to my brother, who is a lawyer, and now, an ex-Catholic. I told him that I wanted to tell the judge that both persons were guilty and innocent at the same time. The environments they both grew up and lived in were not helpful to their flourishing as human beings. His summary of the situation was a bit different than mine: “It’s the fallen nature, the utter depravity of man.” No Christ figures in the courtroom for him that day.

I need the Catholic teaching that the human person is fallen but redeemable through God’s gift of grace, divine friendship and first and our response to it.

What my brother needs is a healthy dose of the sacramental and incarnational world view. The Catholic principal of sacramentality stresses that the divine, the unnamed and unknowable mystery, is made visible and real to us in and through the material. The infinite is experienced in the finite. Bread, wine, water, physical gestures, art, and still others, can and do lead us to the sacred. Is it any wonder, then, that Catholics love to have things blessed — food, animals, homes, religious imagery, boats, work equipment and athletic fields?

Likewise, an incarnational way of viewing the world presents God as one who doesn’t flee from the world, but, in ways we have yet to fully understand, “takes flesh” in this world. In Christ Jesus, God embraces the human condition up to and including death on a cross. The supposed innocent Nativity scenes are part of it as well. Contained within is a view of God which would change the world if we only let it. As the French Jesuit Pierre Teilhard De Chardin said, “By virtue of the Creation and, still more, of the Incarnation, nothing here below is profane for those who know how to see.”

Daley is a teacher at St. Xavier High School and a freelance writer.

Sunday Scripture: Blessed is he who comes in the name of the Lord

Habitat for Humanity dedicates another home in name of Pope Francis 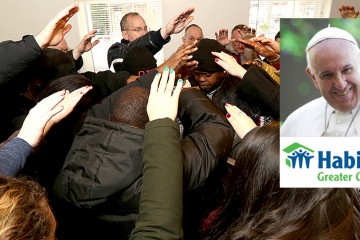