For the past two years I’ve had the opportunity and privilege to go on a mission trip to Vanceburg, Kentucky through the Glenmary Home Missioners. With the Ohio River on one side and the foothills of the Appalachian Mountains on the other, it is a place of striking natural beauty. Unfortunately, significant poverty scars the landscape.

Looking back there are always some events and persons that stay with you more than others. Though learning to country line dance ranked near the top, this year the highlight of the trip was the Wednesday night service at the Mosby Pentecostal Church.

Yes, I’ll admit it. Before attending some uncharitable and stereotypical images entered my head. Chiefly, the snake handling one. Thankfully, it didn’t happen. It was a spirit-filled worship service though—something that the Catholic high school students I chaperoned had never experienced before.

At one and the same time, you could describe the mood as chaotic and ordered. Loud, speedy, almost undecipherable prayers filled the air. Frequent “Amens” were voiced. Hands and arms were held high. Multiple tears were shed. Throughout there was an ongoing and positive exchange between the minister and people in the pews. Though foreign to Catholic ears, speaking in tongues was present. When moved to do so people offered spiritual testimony. It was an intimate, moving, and rewarding experience.

Some months after my return an image from the church remains central. Dominating the wall behind the sanctuary was a large blanket. On it was a picture of Jesus. When I first saw it I smiled in disbelief. There Jesus was pointing to his pierced and flaming heart which was surrounded by thorns and topped by a cross. Either I wasn’t giving my hosts enough ecumenical credit or this was some divine joke God was playing on us. A picture of devotion to the Sacred Heart of Jesus in a Pentecostal church. Surprisingly, I was beginning to feel at home.

I’d be willing to bet that no one there had ever heard of Saint Margaret Mary Alacoque. She was the seventeenth century, French religious woman who experienced a number of mystical encounters with Jesus from which came the modern devotion to the Sacred Heart. At the center of the devotion is Jesus, who through his wounded and pierced heart, offers his compassion, mercy, and love to all of humanity.

Knowing who was in his church building that night, the pastor spoke of the “the Church” rather than “his” or “your” Church. As a shared testimony, our group was invited to sing two songs. “Amazing Grace” was an easy choice. The other one, “We Are Called,” became even moreso, especially as evidenced in the last verse: “Sing! Sing a new song! Sing of that great day when all will be one! God will reign and we’ll walk with each other as sisters and brothers united in love!”

That evening there was a real sense of Christian unity. Was it full? No. Was it fulfilling? Yes. Walls of ignorance and suspicion of the other crumbled. Engagement through prayer and song replaced avoidance from fear. As the devotion to the Sacred Heart invites us to do, whether Pentecostal or Catholic, we were all encouraged to take on the heart of Christ.

Earlier this year at an ecumenical prayer service marking the end of the Week of Prayer for Christian Unity, Pope Francis said, “Christ cannot be divided! This conviction must sustain and encourage us to persevere with humility and trust on the way to the restoration of full visible unity among all believers in Christ.”

Devotion to the Sacred Heart of Jesus and Mosby Pentecostal Church, they’re what keep me Catholic.

Michael Daley is a freelance writer and teacher at St. Xavier High School.

This What Keeps Me Catholic column originally appeared in the September 2014 print edition of The Catholic Telegraph.

Rare books to be on display at University of Dayton 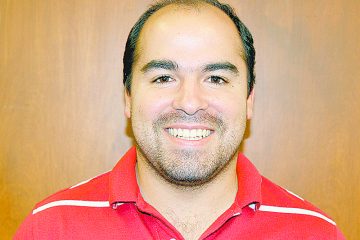