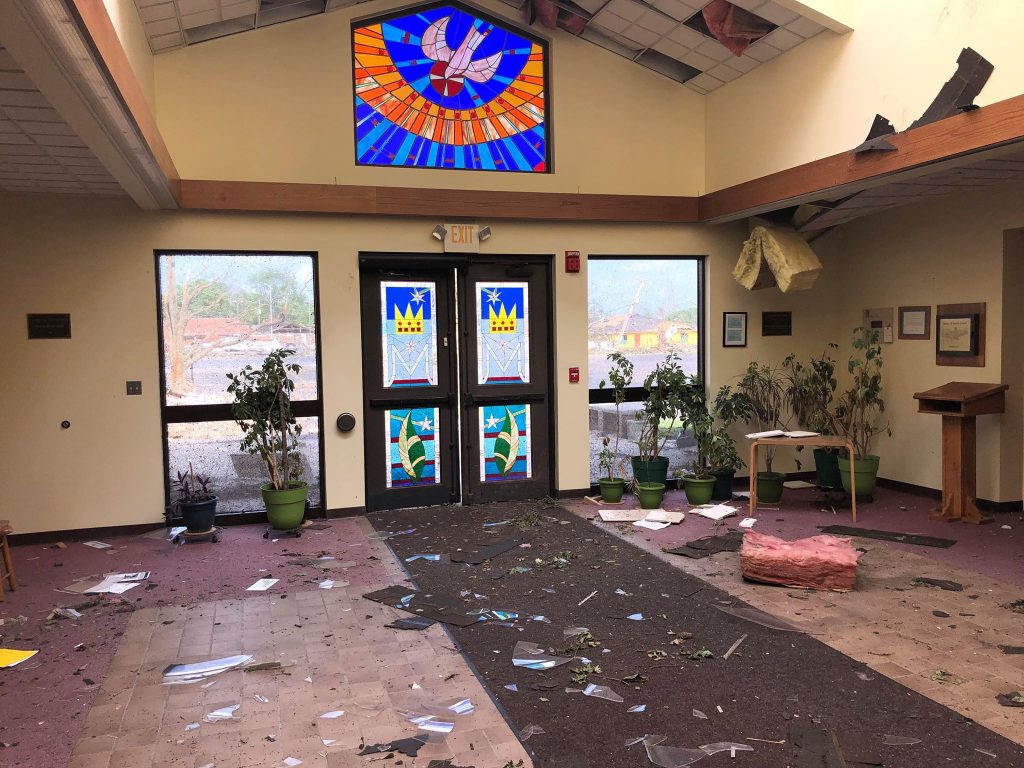 DAYTON, Ohio (CNS) — Although Queen of Martyrs Catholic Church in Dayton sustained significant damage from the May 27 tornadoes that swept through the southwestern region of the state, a statue of Mary on the property remained standing next to the ruined bell tower.

“It was pretty staggering to see this amount of damage, the extent of it. Every building we have here is damaged,” said Don Tomczak, volunteer maintenance director for the parish. “The amazing thing everyone has commented on is the Mary statue having rubble all around it but not being touched. That was our little miracle.”

The Northridge neighborhood of Dayton, where Queen of Martyrs is located, was hit particularly hard by over 140-mph winds. Nearly every home in the area sustained some damage and several structures were destroyed.

Large portions of the church roof were torn off and a corner of main building was heavily damaged. A free-standing brick bell tower that stood in front of the parish was destroyed. Inside, skylights in the narthex were blown out and ceiling tiles fell near the tabernacle.

A state of emergency was declared in three Ohio counties where the severe winds caused at least one death and more than 150 injuries. The local St. Vincent de Paul Society teamed with the Red Cross to feed 135 individuals at temporary shelters. More than 36 hours after the storm, Catholic Social Services of the Miami Valley reported 47,000 people were without power and 17,000 were without water.

The Catholic Telegraph, newspaper of the Archdiocese of Cincinnati, which includes Dayton and other areas affected by the storms, reported at least two other Catholic churches suffered damage from downed trees.

The University of Dayton campus was not damaged by the tornado but had been under a water boil advisory early in the week and students had been advised to conserve water.

The storms triggered massive power outages across the state, which affected water plants and pump stations that prompted the city’s boil water advisory and the closure of public schools May 28.

While churches are insured, the real struggle in the wake of the tornadoes will be getting services to people in need. Laura Roesch, CEO of Catholic Social Services of the Miami Valley, based in Dayton, said that many of the neighborhoods affected were already struggling.

“Some of these are already struggling communities in terms of poverty and financial challenges,” she said. “Natural disasters hit the poor in a very significant way. … The needs are urgent, and they are immediate.”

Roesch said her organization and others such as the Society of St. Vincent de Paul are working together to reach out with food and financial assistance. She added that financial donations to organizations with “boots on the ground” are the most effective way people can be of assistance. 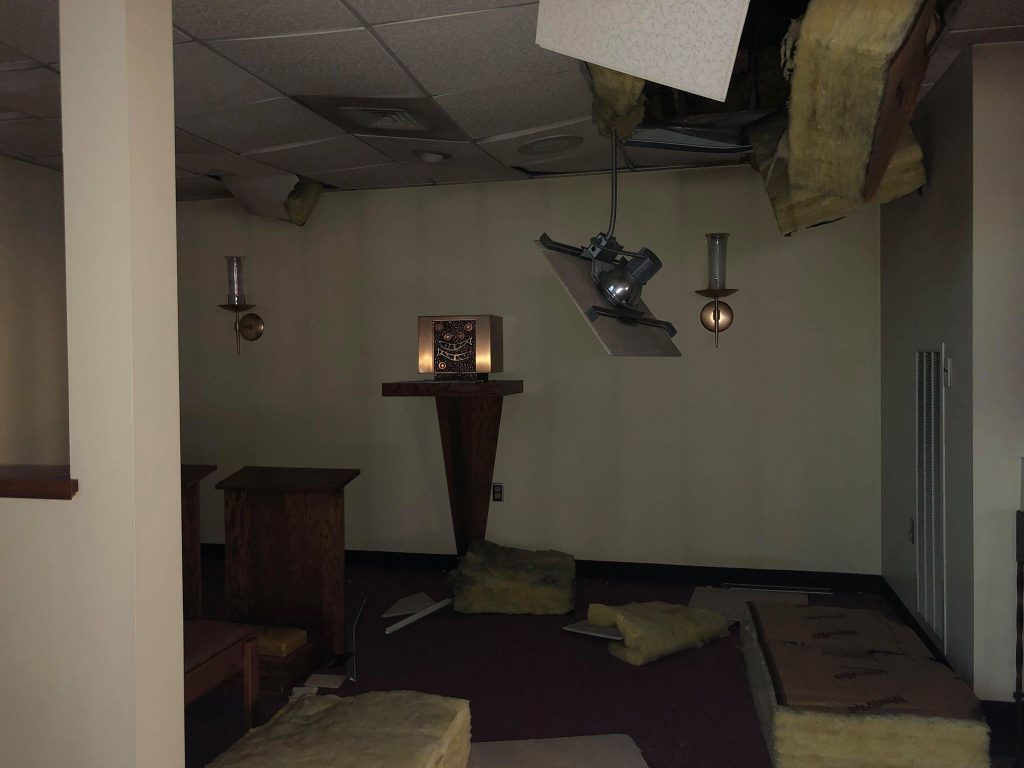 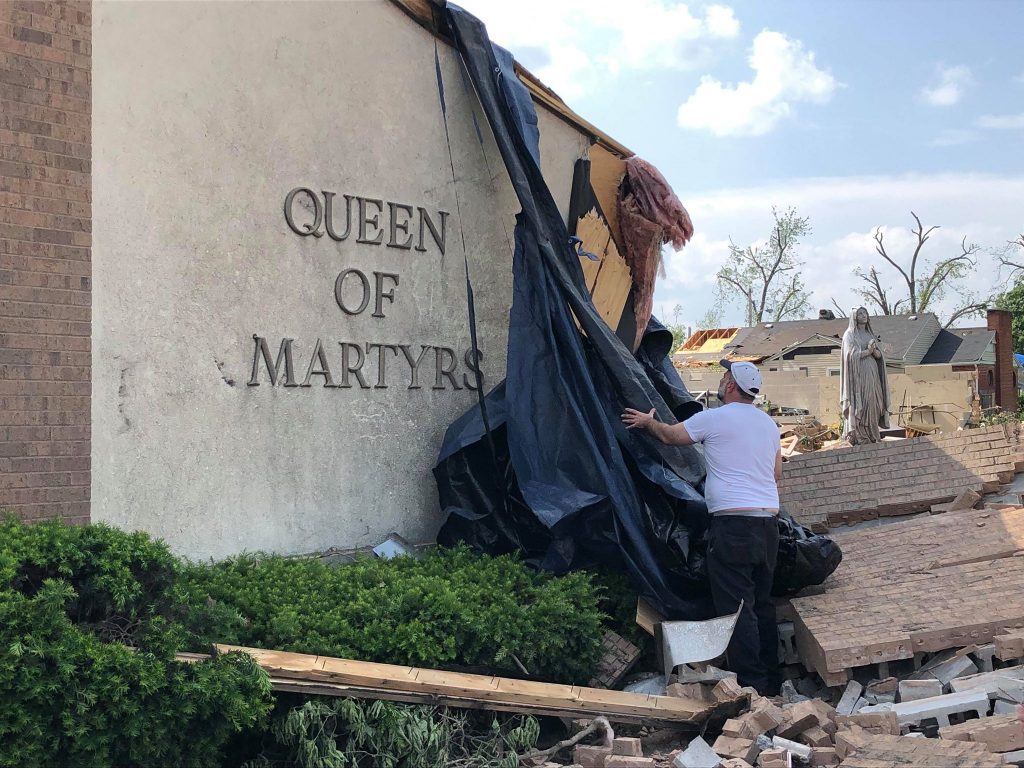 Queen of Martyrs was heavily damaged from the tornado last night. We are working with the Archdiocese insurance adjusters. Every building has been damaged. Until further notice there will not be Mass. Mass will be held at Our Lady of Grace. The church, while sustaining damage, was not destroyed. Our bell tower fell, but Mary was not damaged. Please keep the Queen of Martyrs family in your prayers.

Friends, our community’s recovery from last night’s tornadoes and other storm damage will take many months. Today St. Vincent de Paul assisted the American Red Cross with food distribution to 135 individuals who sought emergency shelter last night in five temporary regional centers.The Northridge area is particularly hard-hit. We know that requests for assistance for clothing, food, and shelter will spike in the coming weeks; if you would like to make a financial contribution to our efforts, you may do that at https://stvincentdayton.org/how-to-donate/

A series of tornado’s caused major damage in the northern part of the Archdiocese of Cincinnati including Brookville, Trotwood, Dayton, Vandalia, Beavercreek, Celina, and Jamestown, leaving the area with many homes damaged, thousands are still without power, and a boil water advisory is in effect for the city of Dayton including the University of Dayton.

Significant damage has been reported at Queen of Martyrs parish in Dayton. Yet in the destruction, the Blessed Mother stands watch over the debris, surviving the 100 mph winds.

Hebda: Catholics ‘depend on the Eucharist,’ and Masses will resume 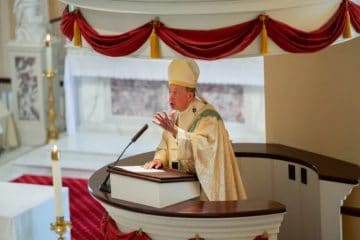