At the dinner opening the week-long convention, Mayra Alza Wilson, coordinator of Latino outreach for Catholic schools in the Archdiocese of Cincinnati, was honored with the Catherine T. McNamee, CSJ Award. This award is given in recognition of promoting a vision of Catholic education that welcomes and serves cultural and economic diversity or serves students with diverse needs.

During Wilson’s tenure, the Latino student population increased from 4.5 percent to 18.8 percent in the 10 targeted schools of the urban core of Cincinnati and Dayton. These 10 schools in the Archdiocese of Cincinnati experienced a 98 percent retention rate for Latino students for the 2015-2016 school year with two percent of the students having moved out of the state.

“Mayra Wilson is one the youngest recipients of the NCEA Catherine McNamee Award,” Archdiocesan Schools Superintendent and Director of Educational Services Susan Gibbons said. “She has been with the Archdiocese for seven years and is outstanding among her peers throughout the country. She has been the leader within the Archdiocese of Cincinnati from the beginning of our Latino outreach efforts. Mayra is an inspiration to all of us.”

“She leads with her Catholic faith and works tirelessly with our Latino families so they can enroll their children in our Catholic schools. Mayra has earned a national reputation for innovative approaches to reaching and engaging Latino families,” Gibbons added.

Glenda Donnelly from Sts. Peter and Paul Academy was awarded the 2018 Lead. Learn. Proclaim Award from the NCEA for dedication and commitment to excellence. The annual award honors those whose ministry is Catholic school education and who have demonstrated a strong Catholic educational philosophy as well as exceptional ability, dedication and results. Donnelly was chosen from more than 150,000 teachers and administrators, as well as diocesan leaders and organizations dedicated to the nation’s Catholic schools.

“The most rewarding thing about my role in Catholic education is that I am in a position to provide our children with the necessary tools to be successful, faith-filled adults dedicated to serving others,” Donnelly said.

Gibbons was also pleased to see Donnelly’s work recognized. “Glenda Donnelly has earned the respect of her fellow principals as someone who is a true example of ‘Catholic leader.’  She quietly but diligently pushes Sts. Peter and Paul School to the forefront of Catholic education because of her dedication and commitment to the children and families she serves,” Gibbons said.

The educators also heard from many speakers, including Archbishop of Cincinnati Dennis M. Schnurr, Cardinal Giuseppe Versaldi, cardinal prefect of the Congregation for Catholic Education for the Vatican, and Bishop of Bridgeport Frank Caggiano, the keynote speaker.

Archbishop Schnurr asked the educators, “Whom do you seek?” echoing St. John’s Gospel.

“By placing this question on the lips of Jesus again and again, St. John invites us to recognize the deepest longing of the human heart.  Or to put it in the words of the “Catechism of the Catholic Church” (27): ‘The desire for God is written in the human heart.’ This beautiful passage reflects a universal desire, one that exists with the deepest yearnings of every human being.”

Archbishop Schnurr drew a parallel between Christ’s early disciples and today’s educators: “Before they were teachers or evangelists, the apostles themselves were students and witnesses.  As we come together for this 112th gathering of the National Catholic Education Association, we realize that this must be our model of Catholic education,” he said.  “Before the apostles led their students, they themselves sat at the foot of the Master.  And before they were teachers of the faith, they were witness to the faith.  From that place of encounter with Jesus, the disciples discovered their vocation in the world.”

“The life of faith has to shine again in all its beauty and attractiveness as when Jesus spoke to the people…with authority,” the cardinal said.

He closed saying that the pope encourages and invites an “authentic culture of encounter and dialogue,” with the modern world “demonstrating an ability to listen,” and to not be on the defensive.

Pope Francis proposes that we choose the “missionary option” in all ministries of the church. Bishop Caggiano reflected on this mission and ways that it applies to Catholic schools today, schools that are intentional about forming missionary disciples.

Click here for our story on the conference attendees praying the steps.

Latest Priests' assignments for the Archdiocese of Cincinnati. 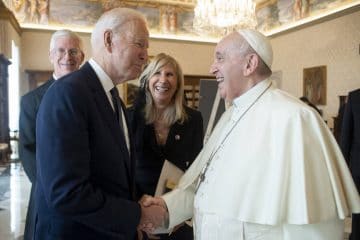