VATICAN CITY (CNS) — Recent exchanges in the media between the head of the Congregation for the Doctrine of the Faith and a former member of a papal advisory commission have highlighted a lack of clarity and transparency when it comes to finding better ways to make bishops and religious superiors more accountable for how they handle allegations of sexual abuse.

The first muddying of the waters occurred in early June 2015 when a Vatican press office briefing and bulletin announced, “The Holy Father approved proposals and authorized that sufficient resources” be provided for a new “judicial section” in the doctrinal congregation in order for the congregation “to judge bishops with regard to crimes of abuse of office.”

While officials told reporters that the Council of Cardinals and Pope Francis approved the proposal presented by Cardinal Sean P. O’Malley of Boston, head of the Pontifical Commission for the Protection of Minors, it was not a “papal fiat,” but rather just a green light for the offices involved to flesh out what procedures could uphold greater accountability, a source familiar with the situation told Catholic News Service.

However, at the time of the announcement, the media and commission members, according to Marie Collins — the newly resigned commission member — were led to believe it was “a done deal” that just awaited implementation. Further proof that the recommendations never carried any legislative weight is that they were never published in “Acta Apostolicae Sedis,” the Vatican’s official bulletin of record.

But even though the announcement was made to the public, Collins said, and media around the world reported it as having been authorized, no one stepped forward to officially clarify or correct the record that the pope’s “approval” was just enthusiastic encouragement. “No one came out to say, ‘No, no, it’s only just a project or something that will be discussed” further, she said March 15 by phone from Ireland.

Collins told CNS that she and other commission members were told four months after the Vatican announcement that the tribunal proposal “was not happening. There was absolutely no explanation” other than that the doctrinal congregation was not going to implement it.

So when Cardinal Gerhard Muller, congregation prefect, told the Italian newspaper “Corriere della Sera” March 5 that the proposal for a new judicial section in the doctrinal office had never been a mandate, but only “a plan,” he was correct. But that kind of clarity is only emerging officially now, nearly two years later, after Collins quit the commission and very publicly criticized “resistance” to the commission’s recommendations.

The commission’s proposal for the Congregation for the Doctrine of the Faith to try bishops for abuse of office was unnecessary, Cardinal Mueller said in the interview, because “the tools and juridical means” and authority for keeping bishops accountable were already in place.

However, if that really had been the case, Collins told CNS, there should have been a lot more bishops being held accountable for mishandling abuse allegations over the years. “Obviously, more was needed,” she said.

In fact, while all the laws on accountability are in theory already there, the problem had been a lack of a well-developed and clear process for dealing with the reporting and judging of such claims, a canon law expert told CNS.

An indication the pope and others agreed the status quo was not enough was the pope’s issuance in June 2016 of the motu proprio, “Like a Loving Mother.”

“It shows that the pope wasn’t giving up on accountability,” she said, and that he didn’t agree that further measures were not needed.

Abuse of office always has been a crime as defined in canon 1389, and canon law always has allowed removal from office “for grave reasons.” The motu proprio connected those two dots, underlining that negligence in exercising one’s office, particularly in cases of the sexual abuse of minors, was among the “grave reasons” that could lead to removal.

The motu proprio emphasizes that not just diocesan bishops or eparchs, but also major superiors of religious institutes could be legitimately removed if their actions or failure to act resulted in grave harm to others. It specified that when it came to negligence regarding sex abuse, a “lack of diligence” was enough to make the case “grave” and open to sanctions.

The papal instruction, however, addresses accountability without involving the doctrinal office — unless the pope deems it necessary on a case-by-case basis.

It upholds, but fleshes out, the current practice of sending cases to the particular congregation that has jurisdiction over the accused: the congregations for Bishops, Eastern Churches, the Evangelization of Peoples or Institutes of Consecrated Life and Societies of Apostolic Life.

It continues with the practice of dealing with the crime of negligence as an administrative process. It only becomes a judicial process that goes to trial if the case is not clear-cut or if the accused contests the accusation. At that point, the pope is at liberty to assign the trial to any tribunal, not just the Vatican’s doctrinal office, but also to an ad hoc tribunal if he so chooses and gives it the necessary jurisdiction, the canonical expert told CNS.

One of the reasons why the commission insisted on having one clearly defined tribunal be charged with accusations was to rectify a potential conflict of interest in the current system where the Congregation of Bishops is charged with overseeing the investigation and suggested sanction of a brother bishop, Collins said.

“You don’t put the same people in charge of administering the sanctions; they’re judging their own. That in normal society is not accepted as a good idea. That would be my objection,” she said.

Also, she said, the huge publicity the proposed tribunal received actually led to people sending in cases, “but it wasn’t there and nobody said it’s not here.”

She said even though she had no authority at the time as a commission member to come out with an official statement, she began to tell people — survivors and media — about a year ago that the tribunal “was not happening” because “I did not believe anything like that should be kept secret.”

However, she said, “it didn’t cause much of a kerfuffle at the time. Maybe people didn’t believe me.”

Holding church leaders accountable with a tribunal and with transparently administered and publicly stated sanctions had been a major priority for Collins, and the tribunal being scrapped was just one of many reasons she quit as an adviser.

“If there are no sanctions, (all the policies and guidelines on child protection) are not worth the paper they are written on. You have to make people accountable.” 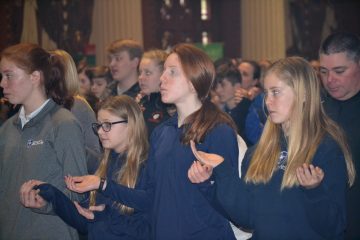