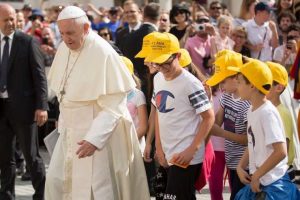 Vatican City, Jun 13, 2018 – Pope Francis said Wednesday that the greatest danger modern youth face is not the array of problems that surround them, but rather, the temptation to mediocrity – preferring to stay immobile rather than making a leap toward the next step.

Pointing to the Gospel reading from Mark in which a rich young man kneels in front of Jesus and asks how to obtain eternal life, the pope said this question “is the challenge of every existence: the desire for a full, infinite life.”

Many young people today seek life, but end up destroying themselves by pursuing worldly desires, he said, noting that some people would say it is better “to turn this impulse off, the impulse to live, because it’s dangerous.”

However, “I would like to say, especially to young people: our worst enemy is not concrete problems, no matter how serious or dramatic: the greatest danger is a bad spirit of adaption, which is not meekness or humility, but mediocrity, timidity.”

A young person who is mediocre has no future, Francis said in off-the-cuff remarks, explaining that “they don’t grow, they won’t be successful” because they are “afraid of everything.”

“We need to ask the heavenly Father for the youth of today to receive the gift of a healthy restlessness, the ability not to be satisfied with a life without beauty, without color,” he said, adding that “if young people are not hungry for an authentic life, where will humanity end up?”

Pope Francis spoke to pilgrims in St. Peter’s Square during his weekly general audience, during which he began a new series of catechesis dedicated to the Ten Commandments.

The dialogue between Jesus and the rich young man in Chapter 10 of Mark’s Gospel, the pope said in his address, is “a pedagogical process” in which Jesus wants to guide the man from youth into maturity, beginning with a question about the commandments, and ending with an invitation for the man to sell his belongings.

This process of maturity, Francis said, can only take place “when one begins to accept their own limits. We become adults when we become aware of what is lacking.”

When Jesus asked the man to sell everything he had and give it to the poor, the man could not do it, and was forced to recognize that what he was able to give could not go beyond a certain margin.

The truth of mankind’s limits is one that has been rejected throughout history, often with “tragic consequences,” the pope said, noting that in the Gospels, Jesus offers his help, saying he did not come to abolish the law and the prophets, but to “fulfill them.”

“Jesus gives fulfillment, he comes for this,” he said, adding that the rich man was taken to “the threshold of a leap, where the possibility was opened of ceasing to live for himself and his own works, his own goods, and – precisely because he lacked eternal life – to leave everything to follow the Lord.”

The invitation to the man to sell everything he owned was not a proposal of poverty, but rather “of wealth, the true kind,” Francis said, asking: “who, being able to choose between an original and a copy, would choose the copy?”

“This is the challenge: to find the original, not the copy. Jesus does not offer surrogates, but true life, true love, true wealth!”

In his closing remarks, Pope Francis also prayed for the beginning of the World Cup, which will take place June 14-July 15 in Russia.

Francis offered his greeting to the players and organizers of the games, as well as those who will watch the matches on television or through social media. He prayed that the event would be “an occasion of encounter, of dialogue and fraternity between different cultures and religions, favoring solidarity and peace among nations.

Share in history as the archdiocese’s first Catholics saw it, only online.

Why did Pope Francis visit a record store in Rome?