Gonzaga University, Villanova University, Creighton University, and Loyola University Chicago have all reached the round of 16 and are vying for a national championship. Since the tournament expanded to 64 teams in 1985, only twice before had so many Catholic schools made it to the “Sweet 16,” noted John Gasaway, author of the book “Miracles on the Hardwood.”

The NCAA tournament is also called “March Madness,” and while a lack of success in some other years might have been maddening for some basketball fans of Catholic schools, the public hasn’t really noticed those years, Gasaway told CNA in an interview on Thursday.

“We remember the good times. Those build the image in the popular imagination. And my goodness, this is certainly the good times in 2021,” he said of Catholic schools’ success.

Leading the pack of Catholic schools in 2021 is Gonzaga, undefeated and having run “wire to wire” as AP’s top-ranked team. The program finished runner up in the 2017 championship and has reached the tournament every year since 1999, making the “Sweet 16” six consecutive times.

Meanwhile, Creighton University is in the round of 16 for the first time since 1974, while Loyola Chicago returns after its Final Four run in 2018.

Gasaway, who interviewed Sister Jean for his book, said she is “just a really observant basketball fan, and a delight to talk to.” The sister’s pregame prayer for Loyola’s Sunday match against top-seeded Illinois even referenced statistics such as the opponent’s three-point shooting percentage.

“This is what she has been doing for a good long while,” Gasaway said of Sister Jean’s basketball knowledge. He noted in the book that she can dish observations of the 1950s University of San Francisco championship squads as well as sharing a “scouting report” on current-day opponents.

While college football fans might instantly point to Notre Dame and Boston College as the top Catholic competitors, the field of college basketball is much larger.

“College football, for whatever reason, has historically favored a much more rigorous caste system in terms of its competitive balance, whereas playing a single elimination basketball tournament makes things a little more free and open,” Gasaway said.

The history of Catholic college basketball includes historic champions such as San Francisco and Loyola Chicago, the rise of programs such as Georgetown University and Villanova in the 1980s, and more recent powerhouses such as Gonzaga.

While some schools have had success at both football and basketball – such as Notre Dame and Boston College – other schools with successful basketball programs such as Gonzaga, Villanova, and Georgetown either do not field football teams or compete at a lower level.

Some schools – such as Holy Cross, Loyola Chicago, and the University of San Francisco – initially fielded football teams but ditched the programs decades ago, “and Catholic basketball is still standing in an area of concentration and pride,” Gasaway said.

“Catholic programs embraced basketball early,” he said. “And obviously, basketball for all programs was easier to embrace than football. It requires less physical space, fewer people, and less physical equipment. So Catholic colleges and universities, among many others, loved it.”

“James Naismith was such a genius in that he invented a game that was more or less instantly popular, and we’re still perfecting it 130 years later,” he said.

Historically, college basketball might be sorted into two models of programs, Gasaway said: the “plains” tradition of midwestern state schools like Kansas University and Indiana University, where basketball took off in the early-20th century, and the “parish” tradition where other schools – many of them Catholic and urban – thrived.

Long into the 20th century, there were two rival postseason college basketball tournaments – the National Invitational Tournament (NIT), and the NCAA tournament. Both still exist today, but the NCAA tournament is now the primary championship; schools not selected for that tournament might receive an NIT bid.

Historically, “parish” schools preferred the NIT. “It was a money-maker, it was in the big city, it was run by private enterprise,” Gasaway said, and nearby fans in the Northeast could easily travel to see their teams compete in New York City. However, over time the NCAA tournament took precedence and became the ultimate postseason invitational.

August 20 – St. Bernard, Doctor of the Church and abbot of Clairvaux, France 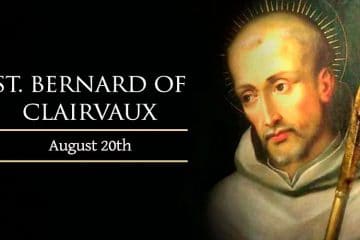