WASHINGTON (CNS) — Catholic leaders worldwide expressed words of hope and joy in calling upon Catholics to come together as one body behind the papacy of Pope Francis.

International political leaders also offered words of congratulations and pledged to work with the new pontiff on common goals and concerns in a complex world.

Church bells tolled around the world with the announcement of the new pope, about 25 hours after 115 cardinal electors entered a conclave to consider who would succeed retired Pope Benedict XVI. Catholics flocked to cathedrals to pray for Pope Francis and offer thanks that a new leader was chosen with the help of the Holy Spirit.

Here is a summary of comments from around the world.

— U.S. President Barack Obama: “”Just as I appreciated our work with Pope Benedict XVI, I look forward to working with His Holiness to advance peace, security and dignity for our fellow human beings, regardless of their faith. We join with people around the world in offering our prayers for the Holy Father as he begins the sacred work of leading the Catholic Church in our modern world.”

— Coptic Catholic Patriarch Ibrahim Isaac Sedrak of Alexandria, Egypt: “I found a smiling person, calm and eradiating peace. And then he did something that captured the people. … He asked that the people pray for him and that God bless him, and there was silence, and you saw all the people wonderfully silent. We need now in the church moments of silence because we are speaking so much we don’t hear ourselves or God or others.

— Archbishop Vincent Nichols of Westminster, England, president of the Catholic Bishops’ Conference of England and Wales: “His election may have taken many of us by surprise, including me; but the more we learn about him, the more it becomes clear that the election of Pope Francis is an inspired one and that his papacy will be inspiring. … By his own example, Pope Francis will help us to have a special concern for the poor because in them we see and serve Christ himself.”

— Archbishop Stephen Brislin of Cape Town, South Africa, president of the Southern African Catholic Bishops’ Conference: “The symbolism of choosing a pope from Latin America has delights and touches us, most particularly in developing countries. Cardinal Jorge Bergoglio, Pope Francis, is a person from humble beginnings. … He has frequently and courageously spoken of the grave inequities afflicting the world and his thirst for justice for all people will be a strong characteristic of his papacy.

— Archbishop Denis J. Hart of Melbourne, Australia, president of the Australian Catholic Bishops Conference: “The announcement brings great joy and hope and readiness to walk with him on the way to Jesus Christ. … His appointment is a sign to all to follow Jesus closely.”

— Archbishop Richard Smith of Edmonton, Alberta, president of the Canadian Conference of Catholic Bishops: “We rejoice in the gift to the church of its new universal pastor and look forward to the witness he will give to us and the world of the hope that is ours in Jesus Christ.”

— Cardinal Peter Erdo of Esztergom-Budapest, Hungary, president of the Council of European Bishops’ Conferences: “The European bishops see in your election a sign of hope and encouragement, a stimulus for us not to be concerned just about the specific problems of the old continent, but to measure the tasks of the churches entrusted to our pastoral care in the perspective of the universal church.”

— President Cristina Fernandez de Kirchner of Argentina: “As (Pope Francis) assumes the leadership and guidance of the church, we hope he may fruitfully pursue the large responsibilities ahead of him in pursuit of justice, equality, fraternity and peace for humanity.”

— President Porfirio Lobo Sosa of Honduras: “Francisco … is now charged with spreading the message of peace and love to the world. May God illuminate and bless him.”

— President Francois Hollande of France: Sent best wishes in facing “the challenges of the contemporary world” as leader of the Catholic Church.

— President Benigno Aquino of Philippines: “The president, along with the Filipino people, joins all the Catholic faithful as they receive their new leader and meet his proclamation with a sense of boundless promise.”

— Ban Ki-moon, U.N. secretary-general: “We share many common goals, from the promotion of peace, social justice and human rights to the eradication of poverty and hunger, all core elements of sustainable development. I am certain that His Holiness will continue to build on the legacy of his predecessor, Pope Benedict XVI, in the promotion of interfaith dialogue, which is the heart of the Alliance of Civilizations initiative.”

— Bishop Javier Echevarria Rodriguez, prelate of Opus Dei: “In this moment filled with emotion, when the church’s universality is vividly sensed, I reaffirm to the new Roman pontiff complete adhesion to his person and ministry, with the certainty that I am expressing the sentiments of the faithful, both priests and laity, of the prelature of Opus Dei.”

— Father Patrick H. Daly, general secretary of the Commission of the Bishops’ Conference of the European Union: “At this critical time when there is deep confusion about Europe’s future, it may be an opportune moment for the new pontiff to inject fresh enthusiasm into the search for a vision of Europe.”

— China Foreign Ministry: “We hope that under the leadership of the new pope the Vatican will adopt a practical and flexible attitude and create conditions for the improvement of China-Vatican relations.”

–Austine Loorthusamy, president of SIGNIS, the World Catholic Association for Communication: “This is a historic moment for Latin America and a powerful sign that the church is truly universal. We pledge ourselves as Catholic communicators across the world to continue to support the Holy Father in his mission of evangelization and reconciliation.”

Archdiocese of Cincinnati to mark Holy Week (Schedule of Events)

Catholic sister: Pro-lifers must be ‘battle ready’ to defend the family 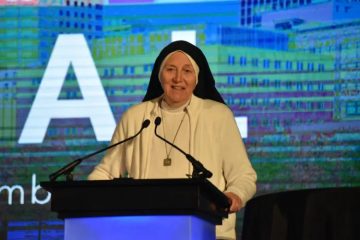